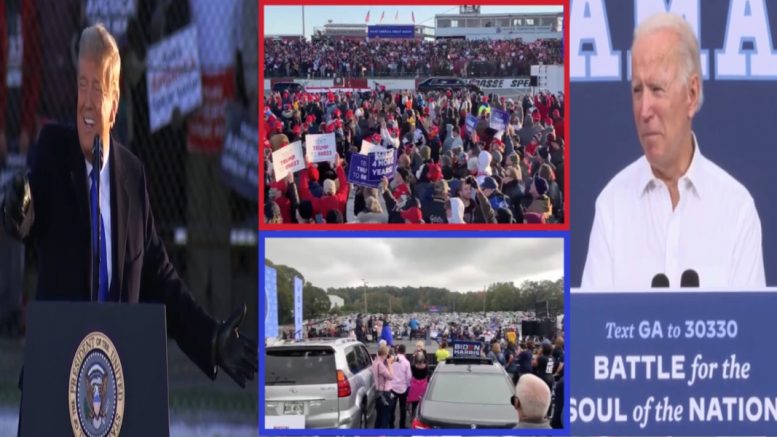 On the contrast, Democratic presidential nominee Joe Biden also attended his second rally of the day to a socially distanced drive-in car rally in Atlanta, Georgia on Tuesday. “His campaign said 290 cars were allowed in with attendants around 870 people, making this the largest event for the former vice president since he’s been on the campaign trail,” Fox News’ National Correspondent Jacqui Heinrich reported on air.

President Donald Trump arrives in the Beast, making its way in front of the grandstand:

Here is “The Beast” with President Trump onboard making its way in front of the grandstand in West Salem, WI. pic.twitter.com/I26z8bQeG9

Thousands of supporters in attendance in Salem, Wisconsin for the Trump rally:

President Donald Trump also took a lap around the Wisconsin speedway in the Beast:

President Trump departs Wisconsin and heads to Nebraska for his third rally of the day:

.@common performs as we await @JoeBiden, Jon Ossoff and Raphael Warnock at a drive-in rally in Atlanta.

This is the largest turnout I’ve seen for Biden since he started holding these drive-in events. pic.twitter.com/iinlOlxDvO