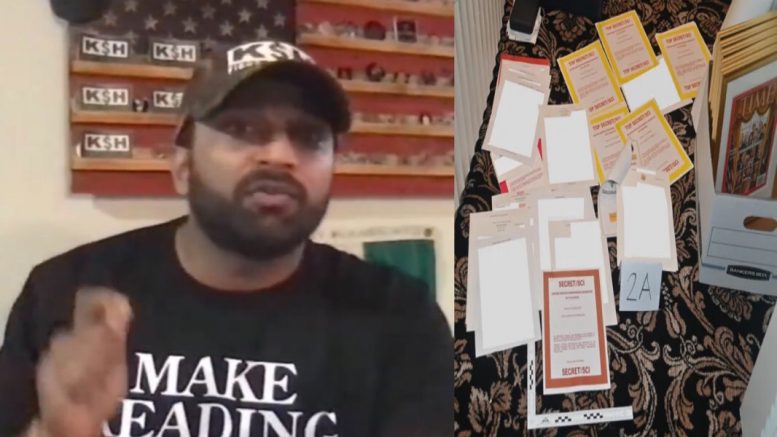 The photographs were released in a 36-page court filing of the agency’s opposition to Trump’s request for a “special master”. DOJ officials asserted in their filing that they uncovered a plot to obstruct the probe into the discovery of government records and accused Trump’s team of moving around and hiding classified documents they had previously searched for.

“It is staged,” Kash Patel told Benny Johnson of the FBI Trump raid photo release. “I wasn’t there. I don’t know if that’s how they found them, but I doubt it.”

“And those red and yellow things that you see on the floor are cover sheets. Those aren’t classified,” he explained of the circulating picture. “They’re saying they’re supposed to be used when you identify classified documents, but there’s nothing on those cover sheets, or any of the underlying documents — that have white pieces of paper on them — that the FBI are showing President Trump never declassified them.”

“So it’s incumbent upon the government, who are bringing or looking to bring criminal charges and the burden of proof … to show that. What they are doing is trying this case in the court of public opinion, because what they’re doing …. is mak[ing] sure Donald Trump never runs again, now be it through federal conviction that precludes him or so much dirt in the media that people get turned off, and all I see is this raid continuing to backfire,” Patel predicted.

“Because it’s not being run by law enforcement; it’s being run by government gangsters like [FBI Director] Chris Wray and [Attorney General] Merrick Garland. And it all goes back to Russia-Gate,” he said. “… Chris Wray should have been fired and never appointed five years ago when Devin [Nunes] and I asked him to get to the bottom of Russia-Gate”.

"It is STAGED. These are NOT classified documents. They are trying this case in the court of public opinion because they don't want Trump to run in 2024. This raid is continuing to BACKFIRE."https://t.co/eFopXPngL4 pic.twitter.com/l2eqJtcVKj

Kash Patel also said, “Let them continue making mistakes. … Their own documents will expose their corruption”.

"Let them continue to keep making mistakes… Start fighting these in the court of law… Their own documents will EXPOSE their corruption." pic.twitter.com/dFZQR4EJtG

"These are personal records… They are shielded from EVER being disclosed and they are within their rights and the law to have them."