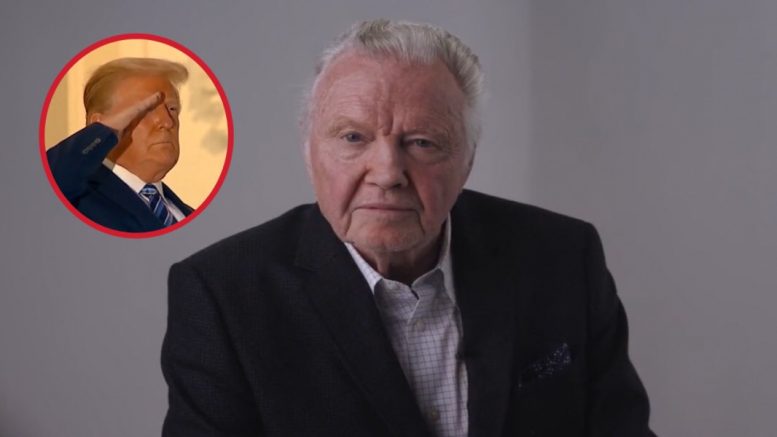 Academy award winning conservative actor Jon Voight posted a video message on Twitter Tuesday, voicing his opinion over the Mar-a-Lago FBI raid and also predicted Donald Trump, “the one president that had our true trust”, will be elected again, because he believes God has a “plan” and “will answer our prayers for this nation”.

“My fellow Americans, can we all speak truths so we can see the lie that was brought upon our President, Trump? And the ones who were once on his side are now finding wrong with the documents. Can we see this lie?” Voight said of the FBI/DOJ seizing alleged classified documents during the raid at Trump’s Mar-a-Lago home earlier this month.

“Did they ever attack [ex-President Barack Hussein] Obama’s home and [ex-President Bill or former Secretary of State Hillary] Clinton’s? Why not?” Jon Voight wondered.

“Because President Trump knows the swamp are all lies and he once drowned them, and they are all afraid you would see the truths. Wake up, America. See this lie. And we must see this as similar to President [John F.] Kennedy’s files,” he said.

“My friends: the deceit will sure die, for no man shall turn truths for their ego, for their unrighteousness, because our witness will surely condemn this war; a third World War, yes. It’s been turned into a war. But this force, this evil force against the American people will be wiped out by the power that once helped [former President] George Washington in the revolution for freedom,” said Voight.

“There is a God, and he the Almighty will answer our prayers for this nation to be strong and safe and loving for our future. This is the greatest country; the land of opportunity, where one can be the greatest self. This is America. And my fellow Americans, I’m proud to be an American,” the conservative actor expressed.

“And I know we will be saved — that there is a plan. The one president that had our true trust was President Donald Trump, and he will do it all over again with the prayers, the hope, the love, the trust of all the American people, once again,” Jon Voight predicted.

He concluded: “May God watch over all and make this land great again. Much love.”

Related: Jon Voight Reacts to the Mar-a-Lago Raid: ‘Is This is a Medieval Time, a Time When Wrongly Condemned is to be Expected?’