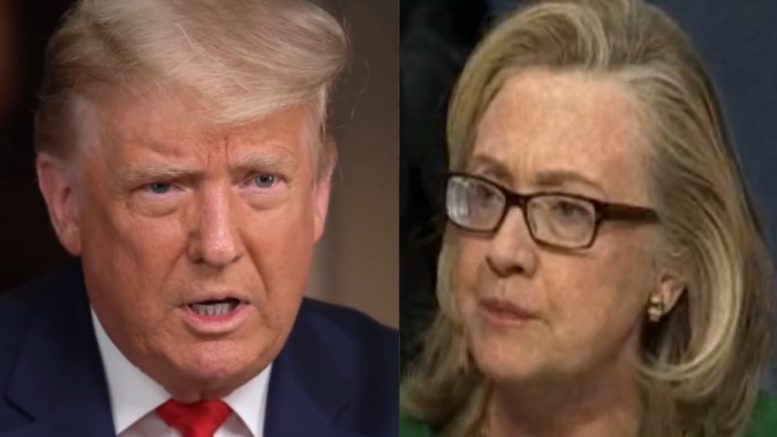 A new video ad released by Donald Trump’s “Save America” political action committee this week illustrates how the 45th President was seemingly proven right regarding assertions that his campaign was “spied on” by political operatives, despite the legacy media claiming otherwise.

The ad comes days after Special Counsel John Durham filed the government’s motion to inquire into potential conflicts of interest on February 11, 2022 in the Michael Sussmann case — alleging that lawyers from Hillary Clinton’s presidential campaign in 2016 had paid to “infiltrate” servers belonging to Trump Tower and later the White House, in order to establish an “inference” and “narrative” to bring to federal government agencies linking Donald Trump to Russia, as previously reported by The Freedom Times.

The video ad begins by saying the scandal is bigger than Watergate in writing and then it switches to an October 2020 interview of then-President Trump telling CBS’s ’60 Minutes’ Lesley Stahl that his campaign was spied on.

Stahl claimed, “There’s no real evidence of that,”, but Trump argued, “Of course there is. It’s all over the place”.

“A new report from Special Counsel John Durham: Clinton campaign lawyers paid a tech company to infiltrate Trump servers to fabricate a connection between Trump and Russia,” the video ad then says.

Fox News’ Jesse Watters appears on the ad, saying, “Hillary Clinton broke the law to frame Trump as a Russian traitor.” Congressman Jim Jordan (R-OH) is seen next, declaring, “This is truly unprecedented, truly something that has never happened in the history of our great country.” Video Below

“Justice is coming for Hillary”, the video ad concludes with writing across the screen and chants of “lock her up” being heard in the background.

The lying mainstream media won’t cover the Clinton spying scandal even though it’s bigger than Watergate!