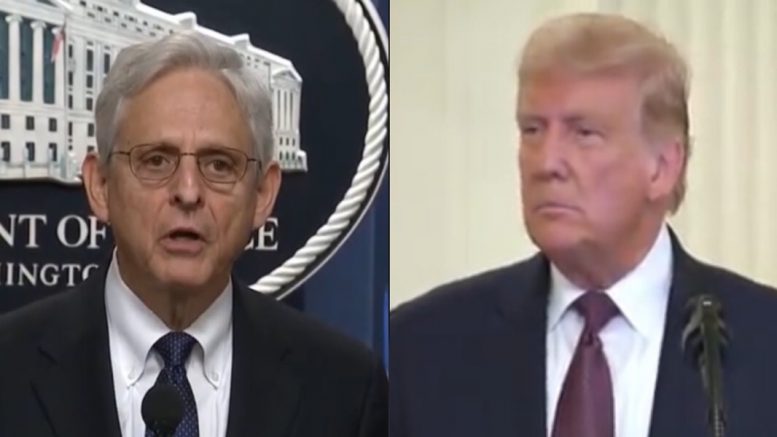 45th President Donald J. Trump issued a statement Wednesday on Truth Social saying that FBI agents were responsible for throwing classified documents “haphazardly all over the floor” of his Mar-a-Lago home during the raid, adding they were “perhaps pretending it was me who did it”.

He was responding to pictures that show papers allegedly marked “top secret”, laying on the carpet of his Florida mansion during the August 8 raid. The photographs were released in a 36-page court filing of the agency’s opposition to Trump’s request for a “special master”. DOJ officials asserted in their filing that they uncovered a plot to obstruct the probe into the discovery of government records and accused Trump’s team of moving around and hiding classified documents they had previously searched for.

“Terrible the way the FBI, during the Raid of Mar-a-Lago, threw documents haphazardly all over the floor (perhaps pretending it was me that did it!), and then started taking pictures of them for the public to see,” 45th President Trump wrote on Truth Social.

“Thought they wanted them kept Secret? Lucky I Declassified!” he further said, reinterring remarks after the seven-page warrant was unsealed on August 12.

“Whatever happened to NUCLEAR, a word that was leaked early on by the FBI/DOJ to the Fake News Media!” he also wondered, referring to an article first reported by the Washington Post earlier in the month, who cited unnamed sources and claimed that some documents relating to nuclear weapons were among the items sought by the FBI. Trump, however, called the report a hoax and a continuation of the Trump-Russia collusion narrative that was peddled by legacy news outlets.

Trump’s legal team has a deadline of 8 p.m. ET Wednesday to file its reply to DOJ’s opposition to the appointment of a special master.

Meanwhile, Eric Trump, son of Donald Trump, told Fox News host Sean Hannity earlier in the month, that his family has the security footage of the FBI’s raid at Mar-a-Lago and is planning to release it “at the right time”, as previously reported by The Freedom Times.

Trump also appeared to react to Attorney General Merrick Garland’s Tuesday memo to personnel reiterating DOJ’s policy that department communications to Congress must go through the Office of Legislative Affairs.

“Congratulations to the many FBI & DOJ Whistleblowers who have flooded the offices of our Senators & Congressmen/women with really bad things to say about what is going on. This is the time, after many years of lawbreaking & unfairness, to clean things up. All things for a reason. DRAIN THE SWAMP!!!” Trump also wrote on Truth Social.