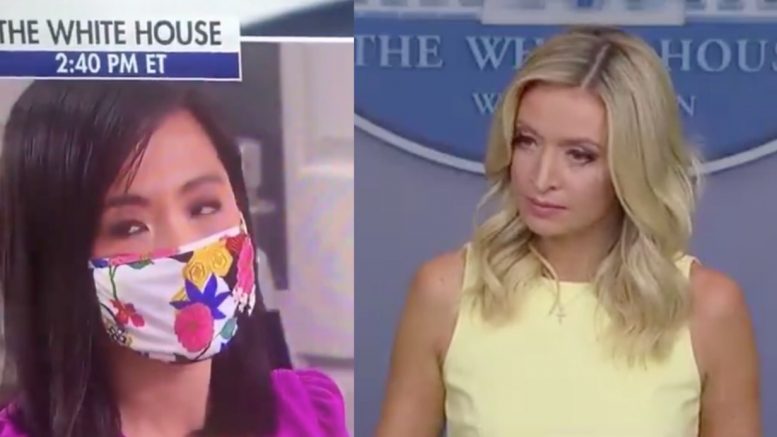 During a Tuesday interview at the White House with CBS News‘ senior investigative correspondent, Catherine Herridge, President Donald Trump was asked: “Why are African Americans still dying at the hands of law enforcement in this country?”

A study by Harvard researchers published in late June found that the number of white people killed by the police between 2013 and 2017 was higher than any other demographic, CBS News reported.

“By population percentages, black people are about three times more likely than white people to die in a police encounter. If the president won’t even acknowledge that, how can he fix the problem?” Jiang asked McEnany. Continued Below

“The president has routinely acknowledged and expressed the absolute atrocity of the case of George Floyd, and his heart goes out to that family still. He was noting a fact that there were– when you look at unarmed killings with police interactions in this country, that you had nine unarmed black individuals that were fatally shot and 19 unarmed white individuals,” McEnany said.

“That’s down from thirty-eight and thirty-two, respectively in 2015. The numbers have actually come down since the Obama administration. He was making that point. But one point he wants to strongly make is this: black men and women who die of homicide, they are likely to die of homicide at eight times greater of that than white individuals and Hispanics combined– that’s the rate combined,” she continued. “That’s an extraordinary thing we want to look at.”

McEnany told the CBS News correspondent that she has “listed the names of these kids who have died across this country”, adding, “It is unacceptable, and under this president, he’ll take take action. And the derelict mayor of Chicago should step up and ask for federal help, because she’s doing a very poor job at securing her streets.” Video Below

.@PressSec points out the facts of unarmed killings by police officers. pic.twitter.com/5NZQdZntNa

While Weijia Jiang was focused on what appeared to be her network’s narrative, telling McEnany, “We are talking about people dying at the hands of police officers”, the White House press secretary moved on to another question by the next reporter, which prompted the CBS News reporter to roll her eyes.

(Related: McEnany Scolds Reporters Over Lack Of Questions ‘On The Deaths That We Got In This Country This Weekend’)