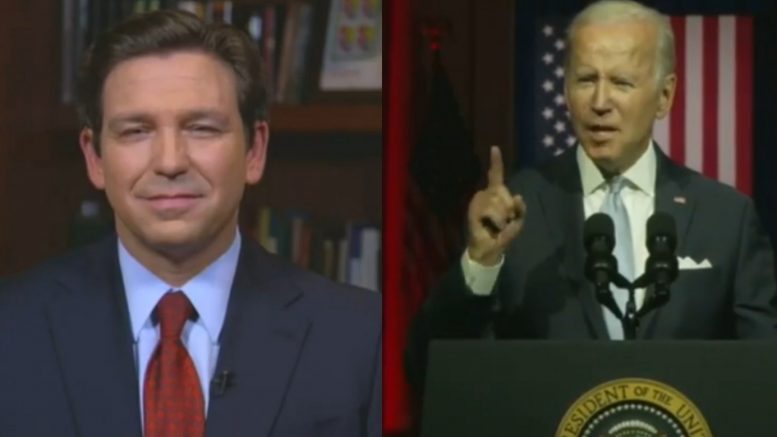 Florida Gov. Ron DeSantis slammed Joe Biden over the speech he delivered in Pennsylvania on Thursday, where he declared that Trump Republicans are “a threat” to America.

“As I stand here tonight, equality and democracy are under assault. We do ourselves no favor to pretend otherwise,” Biden said in his speech. “There’s no question that the Republican Party today is dominated, driven and intimidated by Donald Trump and the MAGA Republicans. And that is a threat to this country.”

Biden later called former President Donald Trump and his supporters “a threat to the very soul of this country” in a tweet sent out on Thursday evening.

Donald Trump and MAGA Republicans are a threat to the very soul of this country.

In response, Gov. DeSantis called Biden’s speech “one of the most disgusting speeches an American president has ever given” while appearing on Friday’s airing of “The Ingraham Angle.”

“[Biden’s speech] was one of the most disgusting speeches an American president has ever given,” DeSantis said. “He ran as being a unifier, and he’s basically saying to the vast majority of the country that disapproves of him that they’re effectively a threat to the republic. He dodders, he lashes out. But at the end of the day, his policies are why there’s so much opposition to him.”

DeSantis continied, “He came in and he opened the border, and we’ve seen what a disaster that’s been. He kneecapped American energy. We’ve seen how that’s hurt millions and millions of people across our country. They’ve inflated the currency. We have one of the worst inflations we’ve had in over 40 years. So of course, people are going to be upset at all the wreckage that he’s left in his wake. He is the American Nero. He’s a failed leader.”Video Below