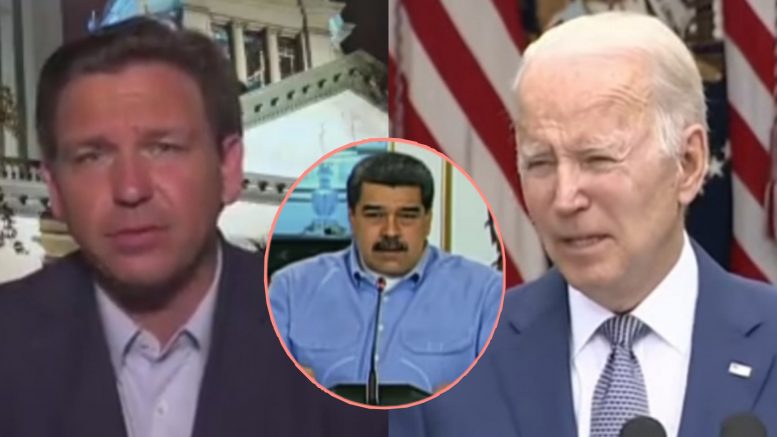 “The energy policy is intentional,” Florida Governor Ron DeSantis declared while discussing Joe Biden’s decision to cancel U.S. oil and gas leases, yet still continue to buy oil from other countries such as Venezuela.

“The Biden administration canceled plans to auction drilling rights in three regions off the U.S. coastline later this year, adding more friction to an uneasy relationship with the oil industry during a period of high gasoline prices,” the Wall Street Journal reported. “The decision to cancel lease sales for two regions in the Gulf of Mexico and one off the coast of Alaska leaves oil-and-gas companies facing a blackout period of unknown length for access to new drilling spots in valuable offshore acreage.”

“They are intentionally reducing our ability to produce oil and gas here in the United States,” proclaimed DeSantis while appearing on Saturday’s airing of Unfiltered with Dan Bongino. “They will beg OPEC for more oil, they’ll beg [Nicolás Maduro] for more oil. I guess Maduro’s oil isn’t global warming, but America’s is. I mean, it’s nonsense. It’s ideology, but it’s very destructive and people are getting absolutely hammered with gas prices.”

DeSantis then urged the Biden to “reverse course” and “start producing more energy here in the United States.”

“He could very easily do that, but what does he do? They are still canceling oil and gas leases. They don’t want us to be energy independent and they don’t care if you suffer at the pump.” Video Below

“I guess Maduro’s oil isn’t global warming, but American is. I mean it’s nonsense”@GovRonDeSantis joins @dbongino to slam the Biden administration for begging other countries for oil, while Americans suffer at the pump. pic.twitter.com/5pAQ1oWPwV