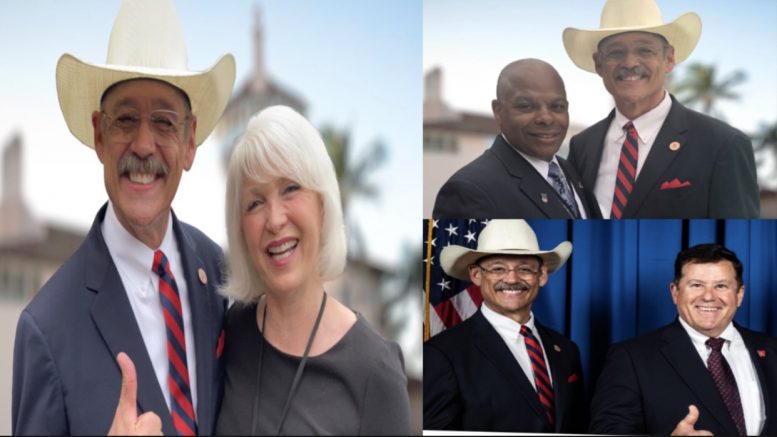 Arizona State Rep. Mark Finchem (R), who is running for Secretary of State in the Grand Canyon State, announced his endorsement for three Republican American first candidates this week and ahead of the November midterms.

“I endorse Colonel Conrad Reynolds for Congress in Arkansas’ 2nd Congressional District. He is a true America First fighter who understands what is at stake in this election. I know he will build the wall, defend our country from invasion, and will protect our guns. Please support Conrad Reynolds today to help him win decisively,” Rep. Mark Finchem wrote on Twitter Monday.

A native Arkansan and military veteran, Reynolds is a retired military intelligence officer, having served in the United States Army for twenty-nine years. He is a decorated combat veteran who has been awarded the Defense Superior Service Medal, the Bronze Star, and the Seal Medallion of the Central Intelligence Agency, according to Reynolds’ congressional campaign website.

Reynolds is challenging the incumbent, French Hill, because Hill has veered in the wrong direction for the people of the Second Congressional District. For example, Hill sided with Democrats in dismissing Trump’s questioning of the 2020 election results. Further, Hill voted with Democrats on the establishment of a partisan January 6 Committee, which has turned out to be nothing other than a tool for attacking Trump, his website states.

Hill also voted with House Speaker Pelosi and Democrats to establish a compulsory national data base for tracking vaccine status. By contrast, Conrad Reynolds supports election integrity, believes the truth about the 2020 election should be exposed, and feels that each American should make his or her own decisions in health matters. Continued Below

“I endorse Jarome Bell for Congress in Virginia’s 2nd District. He is a Navy Veteran & a huge #AmericaFirst fighter. He will defend our guns, our borders, our elections & will fight to reduce inflation & gas prices. I call on all patriots to get behind Chief Jarome Bell today,” Rep. Finchem said.

I endorse @JaromeBellVA2 for Congress in Virginia's 2nd District. He is a Navy Veteran & a huge #AmericaFirst fighter. He will defend our guns, our borders, our elections & will fight to reduce inflation & gas prices. I call on all patriots to get behind Chief Jarome Bell today. pic.twitter.com/k174WUjIkc

Bell is running for Congress to “defend our republic against the foreign and domestic enemies to our Constitution, to which I swore an oath as a member of our Armed Forces — an oath that does not expire, he said, as reported on his congressional website.

He said that he dedicated his life to a career in the Navy, retired as Chief Petty Officer after 27 years, and now turning his attention to once again serve this great nation by working to continue to carry the Donald J Trump torch to Make America Great Again in the United States House of Representatives. Continued Below

“I endorse Tina Peters because she has more courage than thousands of other election officials nationwide combined who haven’t lifted even a fraction of a finger that she has to defend our elections. Tina Peters is going to be an OUTSTANDING Secretary of State for Colorado. Please get behind her campaign today,” the Arizona lawmaker wrote.

Please get behind her campaign today. (2/2)

Republican Tina Peters, a Mesa county clerk, believes that the 2020 election was stolen from 45th President Donald Trump, and in a written statement, said that she’s running to restore public trust in elections and vowed to “put people over the political theater and prioritize them over politics.”

“Colorado deserves a Secretary of State who will stand up to the Biden administration that wants to run our country in the ground with nationalized elections. That is why today I am announcing I am running for Colorado Secretary of State to restore trust and put an end to government overreach in our election process,” Peters said in statement earlier in the year.

“Weaponizing our elections and targeting political opponents has no place in Colorado. We need to get back to honoring our Colorado Constitution, honoring our state legislature to craft laws through a representative government by, of, and for the people,” she said.

Added Peters: “As your next Colorado Secretary of State, I will strengthen checks and balances by following the Colorado Constitution and restoring public trust. I will put an end to reckless ’emergency’ rulings, government overreach, and corruption in the office of Secretary of State. I work for the people of Colorado, not special interest because every day we put Colorado first and don’t quit, we win!”