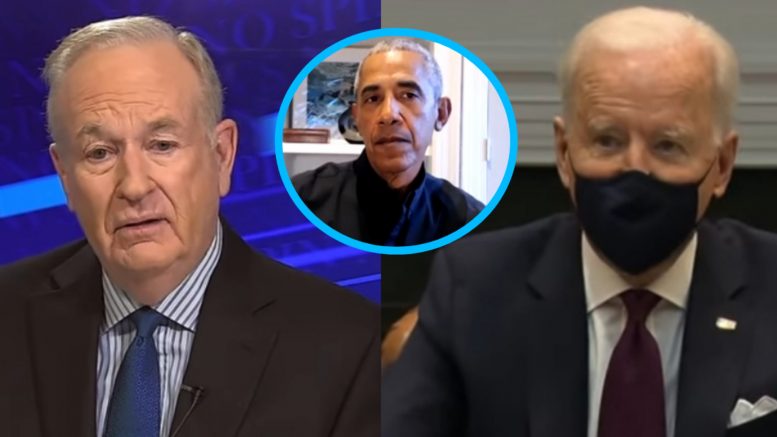 Political commentator Bill O’Reilly warned his audience on Friday that Joe Biden not only “dangerous” but is now “more dangerous” than former President Barack Obama ever was.

O’Reilly centered his commentary around Biden’s open support for H.R. 1 — For The People Act — that was passed by the Democrat-majority House (220-210), which no Republicans supported and only one Democrat rejected.

Related Article: O’Reilly: There’s A Better Than 50% Chance Repubs Will Take Both Houses In 2022 If Biden Continues To Do What He’s Doing

According to O’Reilly, if H.R. 1 unexpectedly passes the Senate with 60 or more votes, the following changes to Federal elections would suddenly come into play nationally: Same-day voter registration would be permitted, an I.D. would no longer be necessary to vote, all convicted criminals who are no longer in prison would be able to vote, 15-consecutive days of early voting would be permitted and voting by mail would be allowed with no restrictions.

“So this should actually be called ‘Anarchy for the People Act’,” O’Reilly declared. “And again Biden supports it.”

He went on to claim that while the bill will not likely have the votes to pass the Senate, “the takeaway for you — the honest American — is that the Democrats want this. They want chaos in every election because chaos works for them.”

Alright now this is my opinion. But I gave him a chance, and now I know that Joe Biden is dangerous. I used to say that he was befuddled, which is of course true. Now I’m telling you he’s dangerous, and a lot more dangerous than Barack Obama was.

“The Progressives have kidnapped him and Jill, held them in a basement for all of those months and now they’re part of the team. ‘Give me a P! Give me an R! Give me an O!’ So Biden’s dangerous.

Biden doesn’t want a vibrant democracy. He doesn’t want a spirited debate. He’s not going to hold press conferences — they call him ‘Hidin’ Biden’ on talk radio now — alright, not going to answer any questions…Jen Psaki will answer them. All Biden’s  going to do is what he’s told. Now who’s telling him? We’ve been over this — Susan Rice is telling him what to do. The consensus goes to Miss Rice, the top domestic advisor.