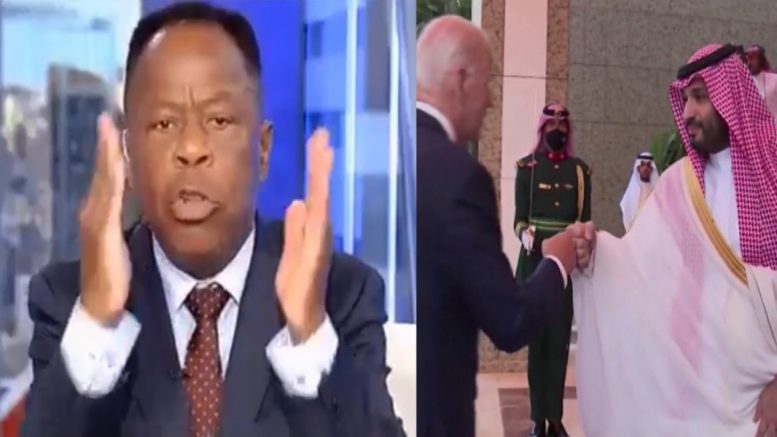 Saudi Crown Prince Mohammed Bin Salman told Biden that “Saudi Arabia is about tapped out, and if President Biden or anyone else wants Saudi Arabia to expand its oil production capacity much more, it’s not gonna happen”, reported Fox News White House correspondent Peter Doocy. “13 million barrels is going to be the max. … They’re already at about 12 million barrels as the max capacity”.

In addition, upon arriving at the royal palace in Jeddah, Joe Biden offered a fist bump to the crown prince, who U.S. intelligence officials concluded was involved in plotting the killing of Washington Post journalist and Saudi dissident Jamal Khashoggi. Critics viewed the gesture, which was followed by a face-to-face meeting with the crown prince, as elevating Salman on the world stage despite Biden’s campaign pledge to make the kingdom a pariah.

Leo Terrell weighed in over Joe Biden’s trip, calling him a “weak president” who embarrassed himself and America.

“Let me tell you what’s amazing: [Biden] went 10,000 miles to get oil, didn’t get any. There’s oil in Oklahoma, in Texas. He could’ve stayed right here. But what is so embarrassing is that he went over there at the time that the consumer price index came out. … He didn’t want to be in this country, because this country is in a disastrous shape ever since he took over office,” Terrell said after the Labor Department reported last week that inflation rose to 9.1% in June.

“And I’ll tell you one other thing that’s also so interesting: he is so timid, weak. … We have a weak president who is not capable of running the most powerful country on the planet,” he opined. Video Below

LEO TERRELL on Biden's trip to Saudi Arabia: "We have a weak president who is not capable of running the most powerful country on the planet." pic.twitter.com/Tf8jnvQvTV

On Monday, Terrell asked Biden on Twitter: “Question to Joe Biden: Other than Embarrassing yourself and America, what did you accomplish visiting Saudi Arabia?”

Question to Joe Biden: Other than Embarrassing yourself and America, what did you accomplish visiting Saudi Arabia?

(Related: Trump on Inflation Suring to 9.1% Under Biden Admin: ‘How can People Survive This?…America will not Allow This to go on for Much Longer’)