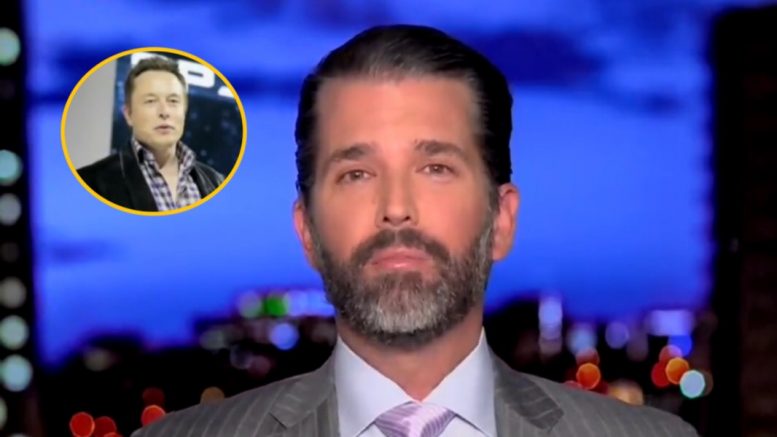 “Just the notion of a level playing field and free speech is far too far for [liberals]. That’s why they’re going nuts and losing their minds,” Donald Trump Jr. told Sean Hannity on Fox News Tuesday.

Don Jr.’s observation comes after business magnate Elon Musk said he would reverse Twitter’s ban on 45th President Donald Trump if he officially takes over the current left-wing social media platform. Musk made the comment Tuesday during an interview with Financial Times, calling Twitter’s decision to ban Trump “stupid” and “morally wrong”, as previously reported by The Freedom Times.

“America is waking up. There’s going to be a red wave in the elections,” Donald Trump Jr. predicts.

“But more importantly, there’s going to be a push back against the woke corporate America that’s [been] by the left for so long,” he said. “And it’s about time”.

Asked why liberals are rejecting Elon Musk, Don Jr. said, “They hate that they no longer have a distinct advantage. If someone even levels the playing field, that’s too much. You saw the reporters [who said], ‘Well, they could manipulate an election by just turning up someone’. You mean like what they’ve been doing to conservatives for the last decade?”

“They can’t stand that they could actually be in fair fight. You know, they’re using to having trillion dollar corporations have their back and function as their marketing department. But that’s not happening anymore. And just the notion of of a level playing field and free speech is far too far for them. That’s why they’re going nuts and losing their minds,” he added. Video Below

Don Jr. HAMMERS Democrats after they go into complete MELTDOWN over Elon Musk saying he would REINSTATE Trump on Twitter 🔥

“Permanent bans should be extremely rare and really reserved for accounts that are bots, or scam, spam accounts … I do think it was not correct to ban Donald Trump,” Elon Musk said.

“I think that was a mistake, because it alienated a large part of the country and did not ultimately result in Donald Trump not having a voice,” he opined. “I would reverse the permanent ban. I don’t own Twitter yet. So this is not like a thing that will definitely happen, because what if I don’t own Twitter?”

Trump, however, has stated that he will not return to Twitter, instead touting his own social media platform, Truth Social.

BREAKING: @ElonMusk says he would reverse Trump's suspension from Twitter and called the ban "morally wrong" and "flat out stupid." pic.twitter.com/ahRTaO5caV

Pompeo Slams Iran’s Foreign Minister For ‘Propaganda’ Amid Soleimani’s Elimination: “Anybody Here Believe” [He] Was Traveling On A “Peace Mission?”