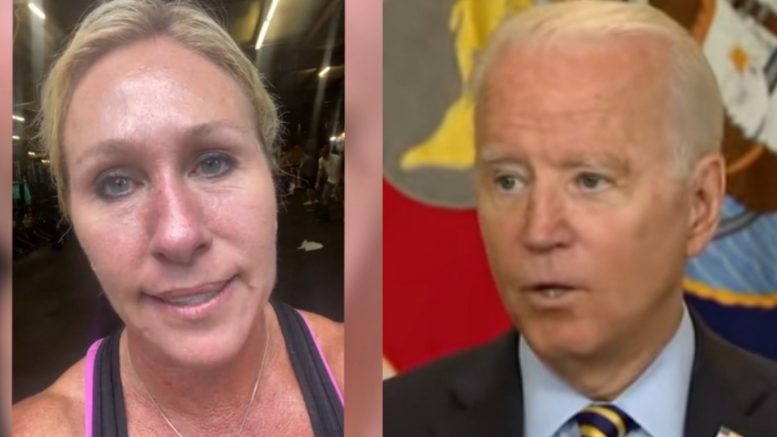 Rep. Marjorie Taylor Greene (R-GA) called Joe Biden “a piece of shit” and urged him on camera to bring home Americans who are “stuck over there in Afghanistan.”

In a 17-second clip posted to GETTR on Wednesday, the congresswoman is seen making scathing remarks directed at Biden over his handling of Afghanistan, as she stands in a gym.

Related Article: Trump Reacts To Packed U.S. Air Force C-17 With Afghans: “This Plane Should Have Been Full Of Americans”

“Joe Biden, you’re not a president. You’re a piece of shit,” Rep. Greene says to the camera with a gym in the background.

“Thousands of Americans are stuck over there in Afghanistan and you’re letting the Taliban kick your ass while you’re lecturing governors about masks and vaccines,” she added. “Do your job. Bring these Americans home.”

A portion of the video was posted to Twitter. See Below

Here’s a portion of a video Marjorie Taylor Greene posted on GETTR but not here on Twitter. pic.twitter.com/A9Hie7sJbo

Watch: Rep. MTG Gets A Standing Ovation After Announcing She Filed Articles Of Impeachment Against Biden