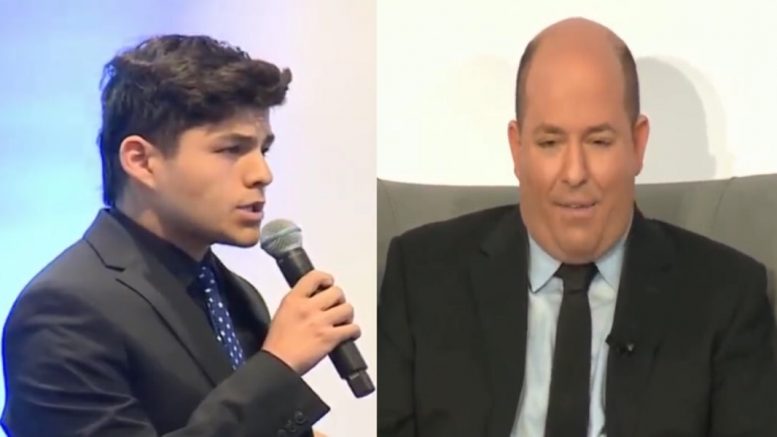 During a “Disinformation and the Erosion of Democracy” conference held by the University of Chicago’s Institute of Politics and The Atlantic this week, CNN and “mainstream corporate journalists” were called “apologists and cheerleaders for the regime” by Christopher Phillips, a college freshman in the audience, who asked a pair of questions to CNN’s Brian Stelter.

Phillips told Stelter, “You’ve all spoken extensively about Fox News being a purveyor of disinformation. But CNN is right up there with them. They pushed the Russian collusion hoax, they pushed the Jussie Smollett hoax, they smeared Justice Kavanaugh as a rapist, and they also smeared Nick Sandmann as a white supremacist, and yes, they dismissed the Hunter Biden laptop affair as pure Russian disinformation.”

“With mainstream corporate journalists becoming little more than apologists and cheerleaders for the regime, is it time to finally declare that the canon of journalistic ethics is dead or no longer operative?” Christopher Phillips asked Stelter, the host of CNN’s “Reliable Sources”.

“All of the mistakes of the mainstream media, and CNN in particular, seem to magically all go in one direction. Are we expected to believe that this is all just some sort of random coincidence, or is there something else behind it?” Phillips also wondered.

” …But I think my honest answer to you … is that, I think, you’re describing a different channel than the one that I watch. But I understand that is a popular right-wing narrative about CNN,” he deflected, likely referring to Fox News. Continued Below

“I think it’s important when we talk about shared reality and democracy – all these networks, all these news outlets have to defend democracy and when they screw up, admit it. … And with regard to ‘the regime,’ I think you mean the president, Biden,” Stelter said.

“The last time I spoke with a Biden aide, we yelled at each other,” the CNN host claimed. “So, that’s the reality of the news business that people don’t see, that people don’t hear. They imagine that it’s a situation that simply is not”.

“But I think your question, it speaks to the failure of journalism to show our work and show the reality of how of profession operates. We have a lot of work to do, I think,” he somewhat admitted. Video Below

Watch the exchange between Christopher Phillips, the college student, and CNN’s Brian Stelter:

Freshman Christopher Phillips CALLS OUT Brian Stelter and CNN for being a "purveyor of disinformation." He points to the Russian collusion hoax, Jussie Smollett, the smears of Justice Kavanaugh and Nick Sandmann, and their dismissal of Hunter Biden's laptop. pic.twitter.com/eHxqAWqVSC

(Related: Stelter Gets Ripped As ‘Fake News’ by His Own Guest: ‘You Are One of the Reasons Why People Can’t Stand the Media’)