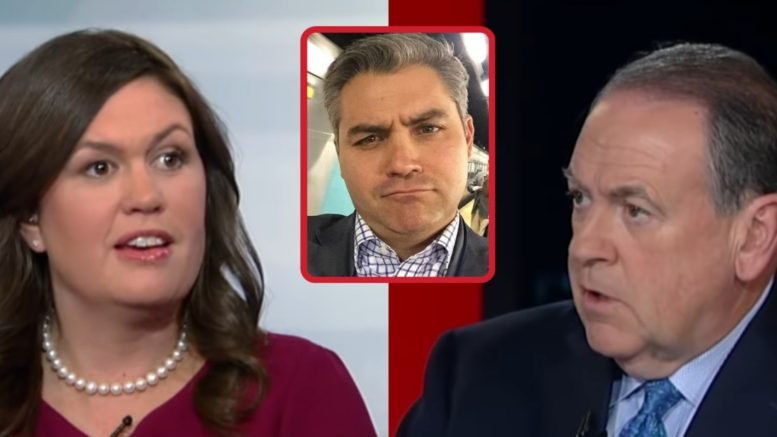 Governor Mike Huckabee hosted the Hannity show. And you will never believe who showed up as a guest!

That’s right! His daughter, Press Secretary Sarah Huckabee Sanders sat in to discuss the recent report that Jim Acosta had his hard pass reinstated. And then they dropped some honey about who might be on the short list for a potential Chief of Staff position. (VIDEO BELOW.)

“Freedom of the press… doesn’t mean freedom to be disruptive.” — Sarah Huckabee Sanders.

First, her Dad, Mike Huckabee introduced her saying that he used all of his “powers of persuasion to get her into the studio!”

Huckabee also said that the White House is expected to address “reporter conduct” with “new regulations.”

Additionally, Sarah said, “We’ve laid out in a letter to CNN and their team what we think were some of the missteps that their reporter made at the Press Conference on November 7th in a letter that we sent them tonight.”

“The Judge was very clear that the White House has the ability to say ‘you can’t come in’,” Sarah continued, “…freedom of the press does not mean freedom to the White House. There has to be due process. So that’s what we’re doing. And we will see what happens from there.” (VIDEO BELOW.)

Wait…what? Who is on the short list for the Chief of Staff?

Well, neither Dad nor daughter spilled the beans BUT…Tammy Bruce said earlier on Hannity that Sarah just might be up for the Chief of Staff position!

Governor Huckabee said, “Thirty seconds and that’s all we’ve got but, look, earlier Tammy Bruce on this show said, ‘Well, Sarah Sanders is going to be leading the White House’.”

Then they joked about how maybe Tammy knew something Dad and daughter didn’t know! Sarah and her Dad laughed…and it leaves more questions than answers! Time will tell!

WATCH as Sarah Sanders joins her father, Mike Huckabee as he hosts for Sean on the Hannity show.

Huckabee Slams Maddow Upon Hearing Of Her $7 Mil Salary: ‘Why Is Delivering Garbage Worth More Than Hauling It Away’