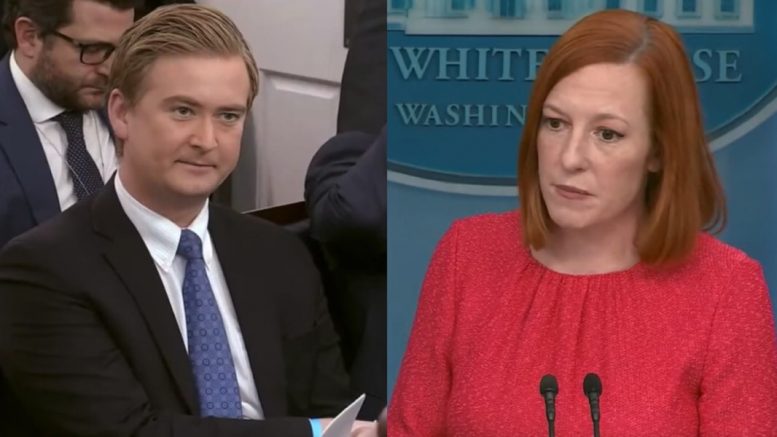 Fox News White House correspondent Peter Doocy on Thursday questioned press secretary Jen Psaki over what the plan is for the expected 18,000 migrants a day who cross the border when Title 42 expulsions expire next month, a public health policy, that has been used by both the Trump and Biden administrations to quickly expel migrants at the southern border since the start of the COVID-19 outbreak.

Doocy also asked Psaki if the White House will find places to stay and something to do for the illegal immigrants Texas Governor Greg Abbott plans to bus to Washington, D.C.

“When Title 42 expires next month, what is the plan for the 18,000 migrants a day that are going to cross? Do you want them to get jobs here? Is there something else you want these 18,000 a day to be doing?” Doocy asked Psaki.

“I don’t know where you’re basing your specific number on … ” Psaki claimed, before Doocy informed her the numbers are from the Biden administration’s Department of Homeland Security (DHS).

“The Department gave … an estimate that up to 18,000 migrants could be apprehended and at the border each day if Title 42 were being lifted,” Doocy said, reading an apparent statement from DHS.

Psaki deflected, saying, “Up to, and we’ll see what happens”, before reading off what appeared to be prepared talking points. Continued Below

Psaki was also pressed by Doocy over Texas Governor Greg Abbott’s recently announced plan to put illegal immigrants in his state onto a bus and send them to the Capitol Building in Washington, D.C.

“Now that the Texas governor is saying that he’s going to start bussing border crossers to Washington, D.C. when they get here, are you guys gonna help them find a place to stay and something for them to do?” Doocy wondered.

“I’m not aware of what authority the governor would be doing that under. I think it’s pretty clear this is publicity stunt. … “I know that the governor of Texas, or any state, does not have the legal authority to compel anyone to get on a bus,” Psaki claimed. Videos Below

Peter Doocy asks Psaki what the plan is for the 18,000 migrants who cross the border a day when Title 42 expires. pic.twitter.com/TYWoEpU8UN

Peter Doocy asks Psaki if the White House will find places to stay and something to do for the migrants Texas Gov. Abbott plans on bussing to DC. pic.twitter.com/WGSLHwG6XK

(Related: Gov. Abbott: ‘Texas is Providing Charter Busses to Send These Illegal Immigrants, Who Have Been Dropped off by the Biden Administration, to Washington, D.C.’)