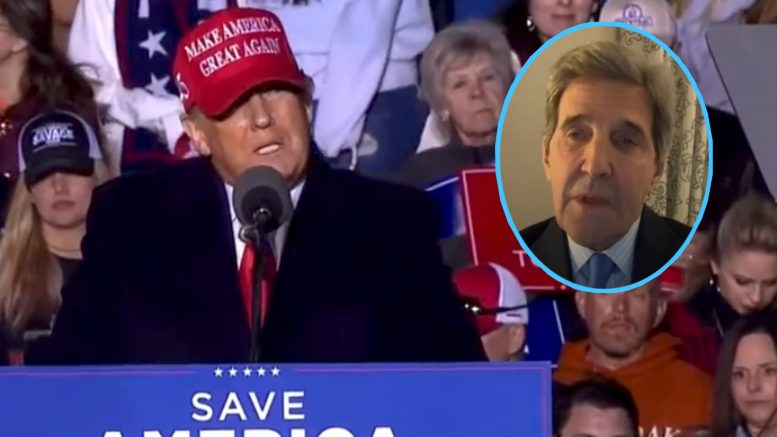 The former president was voicing his disgust with Democrats’ prioritizing clean-air policies during a time when there are global nuclear threats.

“This is the single-most dangerous time for our country in history — far more dangerous than World War I or World War II and that’s because of the power of nuclear weapons. And yet, you have people like John Kerry worrying about the climate!” Trump said.

President Trump says you got people like John Kerry talking about the ocean levels raising 100th of 1% over the next 300 fucking years. pic.twitter.com/plhYwE3Ope

Trump addressed a wide-range of other topics, including alleged election irregularities that have been uncovered in Georgia since the 2020 election, amd he vowed to “rescue the state of Georgia from the RINOs” and “the Radical left.”

President Trump says there was 18,486 votes in Georgia from people that happened to be dead. pic.twitter.com/HaNQo6769s

TRUMP: "We're going to rescue your state from the radical left, and then, we're going to – ready? – Make America Great Again." #TrumpRally pic.twitter.com/DnlwejgzER

The 45th President wrapped up his speech in classic fashion, as he danced to the “YMCA.”