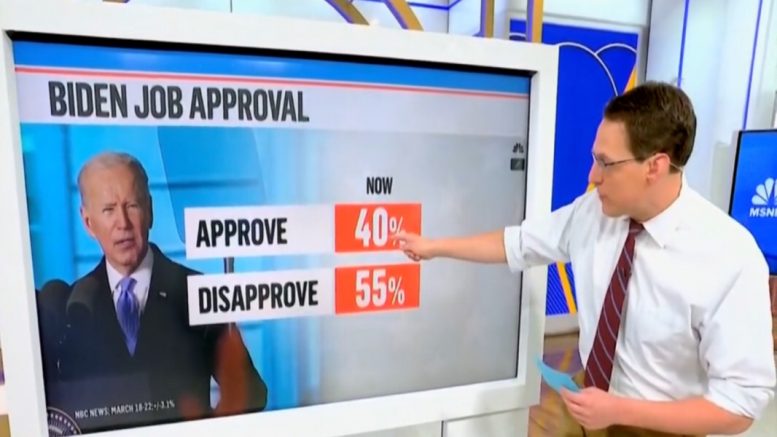 79-year-old Joe Biden’s approval numbers has fell to the lowest level of his presidency, according to a new NBC News poll conducted March 18-22.

55% of adults in the poll disapprove of Biden’s performance, while only 40% approve. 71% of Americans said they believe the nation is headed on the wrong track, and 63% disapprove of the way Biden is handling the economy, the poll found.

NBC: "Well over 50 percent disapprove" of Joe Biden as his approval numbers fall to the lowest level of his presidency. pic.twitter.com/jSDBqC5CZu

Kornacki says it’s “a new low” for Biden as the “cost of living” and “jobs and economy” are the top concerns among voters:

"A NEW LOW": Almost two-thirds of Americans disapprove of Biden's handling of the economy, with "cost of living" and "jobs & economy" at the top of voters' concerns. pic.twitter.com/Ywpu5WDuVF

The NBC News poll also found 46 percent of registered voters preferring a Republican-controlled Congress, compared to 44 percent who said they want Democrats in charge. The 2-point GOP lead — within the poll’s margin of error — is the first the Republicans have held on this question since 2014, according to NBC News.