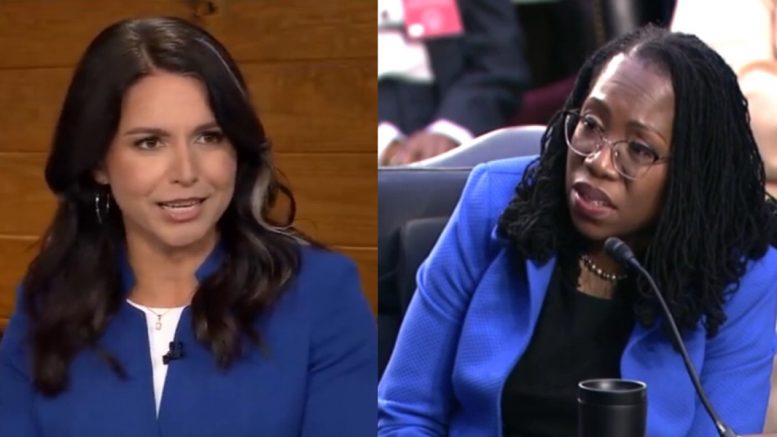 Jackson claimed she could not define the term “woman” because she is “not a biologist” when questioned by Senator Marsha Blackburn (R-TN), as previously reported by The Freedom Times.

“In order to have a Supreme Court committed to protecting the rights of all Americans, including women, every justice needs to understand there is such a thing as a woman, as distinct from a man,” Tulsi Gabbard said in a Thursday tweet, weighing in over the matter.

“The hypocrisy and absurdity of this is that she was nominated by President Biden in large part because she is a woman,” Gabbard pointed out.

During a press conference in Delaware in June 2020, Joe Biden said that he hoped to appoint a Black woman to the Supreme Court if the opportunity presented itself. “We are putting together a list of a group of African American women who are qualified and have the experience to be in the court,” he said during the 2020 conference. “I am not going to release that until we go further down the line of vetting them”, CNBC reported. Continued Below

(2/2) … Judge Ketanji Brown Jackson said, “I don’t know.” The hypocrisy and absurdity of this is that she was nominated by President Biden in large part because she is a woman.

In another exchange on Tuesday between Senator Blackburn and Judge Jackson, the Tennessee Senator inquired over Jackson’s opinion on “physical differences between men and woman”.

BLACKBURN: "Do you agree with Justice Ginsburg that there are physical differences between men and women?"