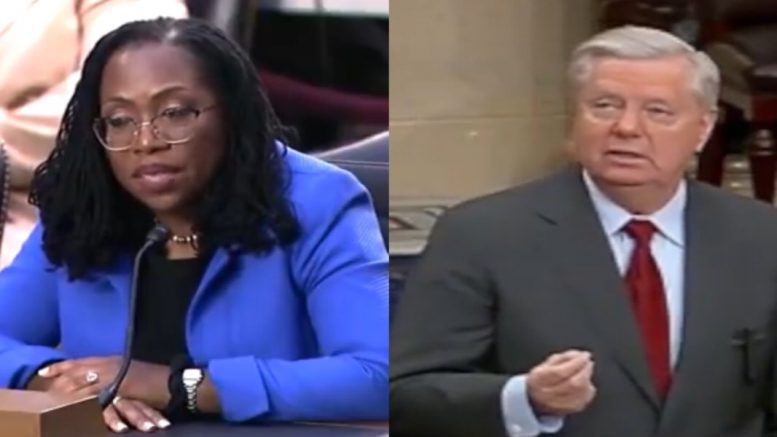 Senator Lindsey Graham (R-SC) announced on Thursday he will “oppose” and “vote against” the nomination of Judge Ketanji Brown Jackson to the Supreme Court of the United States.

Graham released a statement on Twitter with his decision, along with detailing his reasoning on the Senate floor.

In a statement on Twitter, Senator Lindsey Graham wrote, “I oppose and will vote against the nomination of Judge Jackson to the Supreme Court.”

“My decision is based upon her record of judicial activism, flawed sentencing methodology regarding child pornography cases, and a belief that Judge Jackson will not be deterred by the plain meaning of the law when it comes to liberal causes,” he said.

“I find Judge Jackson to be a person of exceptionally good character, respected by her peers, and someone who has worked hard to achieve her current position. However, her record is overwhelming in its lack of a steady judicial philosophy and a tendency to achieve outcomes in spite of what the law requires or common sense would dictate,” the South Carolina Senator explained.

“After a thorough review of Judge Jackson’s record and information gained at the hearing from an evasive witness, I now know why Judge Jackson was the favorite of the Radical Left,” Senator Graham said.

Senator Graham says he “will oppose” Judge Jackson’s nomination to the Supreme Court and “vote no”:

Sen. @LindseyGrahamSC: "This morning I'm going to announce my decision on Judge Jackson's nomination to the Supreme Court. I will oppose her and I will vote no." #SCOTUS pic.twitter.com/DRIwbWklDs

(Related: Sen. McConnell: ‘I Cannot & Will Not Support Judge Jackson for a Lifetime Appointment to the Supreme Court’)