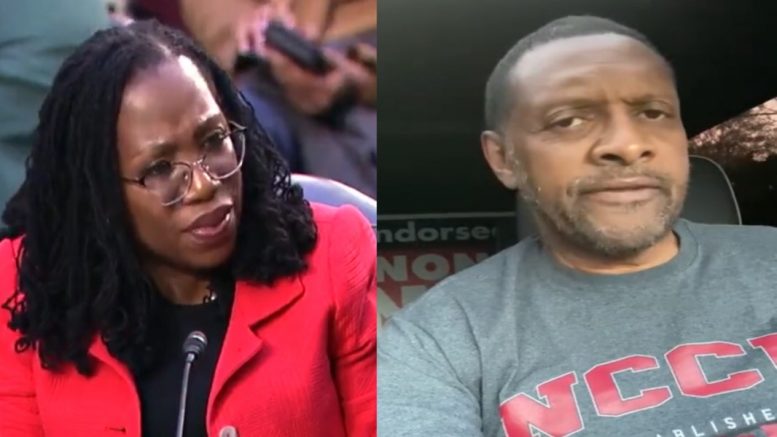 Georgia congressional candidate Vernon Jones reacted to Joe Biden’s Supreme Court nominee Judge Ketanji Brown Jackson, who claimed on Tuesday that she could not provide a definition of the word “woman” while being questioned by Senator Marsha Blackburn (R-TN), during the second day of confirmation hearings in the Senate Judiciary Committee.

Jackson told Senator Blackburn that she could not define the word “woman” because she was not a “biologist”, as previously reported by The Freedom Times.

Vernon Jones responded to Ketanji Brown Jackson’s statement in a Twitter video message on Wednesday, wondering if she can “define what a Black woman is?”

“I am just livid by this because this is what the liberals have done to the Black community. They have destroyed the Black community so much, until a Black woman — who’s going to be on the Supreme Court, that may have to hear discrimination against women — she cannot and will not define what a woman is. Yeah, that is what liberals have done to this country,” he said.

“As much as we hear about strong women, strong Black women — we name this all the time — but she can’t define a woman is? We have a problem,” Jones expressed. “… But when a woman refused to define what a woman is, that’s scary. … We can’t allow this to happen.” Video Below

“We have to stand up and speak out, because there is a difference between a woman and a man. And we all know what the definition of a woman is, but she refused to do it. … She’s been hijacked by these liberals who are destroying this country,” the Georgia congressional candidate said.

As a black man, I care about QUALIFICATION, not Identity, when it comes to deciding our next Supreme Court Justice.

And any nominee who refuses to define the word “woman” and enables child predators is simply DISQUALIFIED.

Try calling ME a racist. pic.twitter.com/RTrPJrfGu0

(Related: Sen. Kennedy to Ketanji Brown Jackson: ‘When Does Life Begin, in Your Opinion?’)