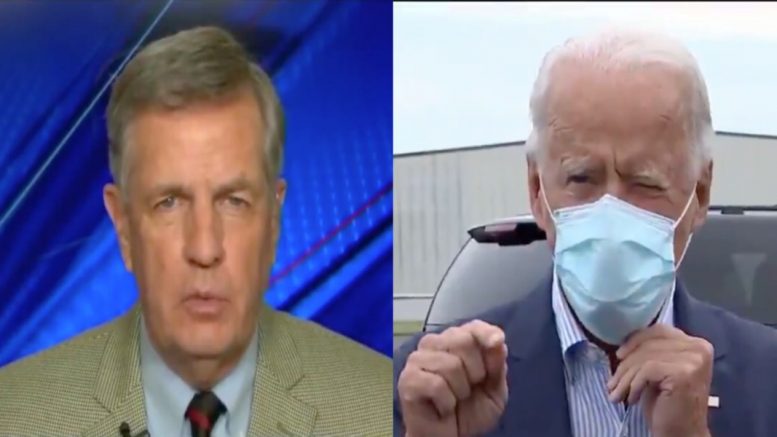 Conservative political commentator Brit Hume said on “Fox News Sunday” that Democratic presidential nominee Joe Biden’s refusal to answer whether or not he will pack the Supreme Court is “getting more and more wild” and called it “utter nonsense” after Biden claimed that it was “unconstitutional” to nominate Judge Amy Coney Barrett and proceed forward.

This comes as Biden, Senator Kamala Harris (D-CA) and their campaign managers have all refused to answer, and instead, deflected to talking points in that “people are in the process of voting right now”, despite the fact that voters chose the the president in 2016, Senate in 2018, and the Constitution.

The United States Constitution provides that the president “shall nominate, and by and with the Advice and Consent of the Senate, shall appoint Ambassadors, other public Ministers and Consuls, Judges of the Supreme Court, and all other Officers of the United States, whose Appointments are not herein otherwise provided for…” (Article II, section 2), as reported under the history of the United States Senate.

Asked about his thoughts on Joe Biden refusing to answer whether or not he will pack the Supreme Court, Brit Hume said, “I don’t think it’s a tenable position.”

“Now his answers are getting more and more wild. He said for example yesterday that the American public did not ‘deserve to know’ his position on that, which is a very odd thing for somebody to say about their voters,” Hume said of the former vice president.

Hume was referring to when Biden was pressed over Supreme Court packing on Saturday by KTNV Anchor Ross DiMattei during a interview on a local TV station in Las Vegas, NV, in which Biden told DiMattei, “No, they don’t [deserve]” to know. Continued Below

Joe Biden on Saturday also told reporters of President Trump’s Supreme Court nominee, Amy Coney Barrett, “It’s not constitutional what they’re doing. We should be focused on what is happening right now. This court is being packed now by the Republicans after the vote has already begun.”

“He also said that the way Republicans were approaching this nomination was unconstitutional, which is utter nonsense,” Brit Hume continued. “And of course, he’s got the court packing line you saw [Democrat Delaware Senator] Chris Coons trying out. Appointing justices to vacancies on courts is not court packing. It never has been. It’s an expression dated from the 1930’s when Franklin Roosevelt tried to expand the Supreme Court, and it backfired and has been court packing ever since.”

“What President Trump needs right now is more Joe Biden on that issue because as long as he refuses, it’s gonna hurt him,” Hume recommended. Video Below

Fox News’s Brit Hume says Joe Biden’s refusal to answer whether or not he’ll pack the Supreme Court is “getting more and more wild” and “utter nonsense.”

The American people deserve an answer from Joe Biden! pic.twitter.com/LgW0u7cQaz

Democrat Sen. Chris Coons is confronted on Joe Biden refusing to answer if he would pack the Supreme Court: “why not just be straight with the American voters”https://t.co/z8gvDAIFtD pic.twitter.com/yj7gPVWpbr

“Court packing” is a colloquial expression dating to at least the 1930’s when Franklin Roosevelt proposed adding seats to the court. It backfired and failed and has been referred to as court packing ever since. It’s the kind of succinct, well-known term newspeople normally like. https://t.co/fslvlhnXV8