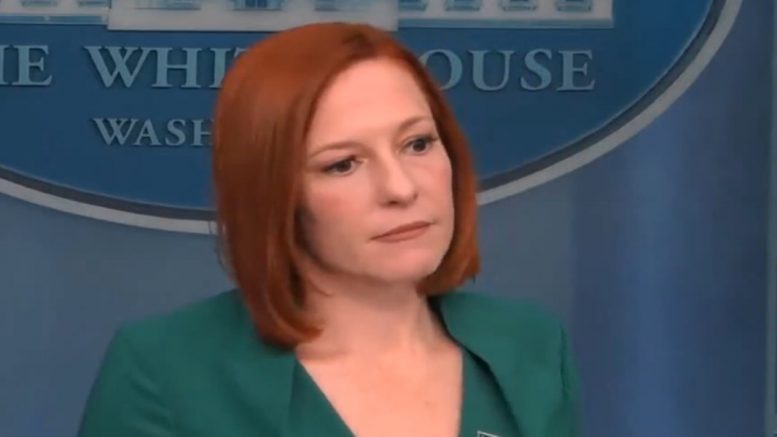 A comprehensive report about the ongoing federal probe into Hunter Biden’s tax filings published by the New York Times on Wednesday night confirmed the existence of the first son’s infamous laptop. In October 2020, The Post exclusively reported on the contents of Hunter Biden’s laptop that he ditched at a Delaware repair shop in April 2019, as reported by the New York Post.

During a press briefing on Thursday, White House press secretary Jen Psaki was questioned over the matter but refused to comment on Hunter Biden’s laptop, even though she had tweeted misinformation on October 19, 2020, from Politico, an article titled: Hunter Biden story is Russian disinfo, dozens of former intel officials say.

“You also in October 2020 dismissed [Hunter Biden’s laptop] as Russian disinformation. Do you stand by that assessment?” Psaki was asked by a reporter, which she declined to comment twice, instead, referring reporters to the DOJ.

Look at Psaki’s body language when they ask about Hunter’s laptop pic.twitter.com/H0JMB2LVP6

The laptop’s hard drive contained a trove of emails, text messages, photos and financial documents between Hunter Biden, his family and business associates — detailing how the president’s son used his political leverage in his overseas business dealings. The repair shop owner reported the laptop to the FBI, which seized the device and its hard drive.

According to the Times, the emails between Hunter Biden, Archer and others regarding their international business activity came from files the publication obtained that “appears to have come from a laptop abandoned by Mr. Biden in a Delaware repair shop.” People familiar with the emails and investigation confirmed their authenticity to the Times.

In the category of – didn’t see this coming : The ⁦@nytimes⁩ confirms the authenticity of Hunter Biden emails derived from his laptop that had been previously dismissed as Russian disinformation. pic.twitter.com/nK7xnD0fP2

During a 2020 presidential debate, Joe Biden had claimed the laptop was Russian disinformation.

“There are 50 former national intelligence folks who said that what he’s accusing me of is a Russian plant,” Biden said when Trump raised the issue. “[F]ive former heads of the CIA, both parties, say what he’s saying is a bunch of garbage.”

During the second presidential debate, Joe Biden claimed that the election was about character and telling the truth. He then went on to blame Hunter's laptop on a Russian plot. pic.twitter.com/h7j7l1xnn4

Trump had previously called out a reporter for not reporting over the laptop:

Leslie Stahl of 60 Minutes claimed the laptop couldn’t be verified:

TRUMP: "What can't be verified?"

STAHL: "Because it can't be verified."
pic.twitter.com/siPKRELmPV

We also leave you with some reactions from users on Twitter over the New York Times admitting the laptop story is real:

If they can lie about Hunter Biden's laptop, what else can they lie about?

Now that the New York Times has even confirmed the Hunter Biden laptop's veracity, can we begin to admit that Joe Biden is, by definition, a compromised politician?

What you got on Twitter if you tried to view the New York Post laptop story in October 2020. https://t.co/r8NuOE4poD pic.twitter.com/bQbyaWgWU7

When are the thousands of people, who were banned from social media platforms for telling the truth about Hunter's laptop, going to get their accounts back?

– and when are the thousands of people, who've been saying the Hunter laptop story was fake, going to be suspended?

The real question about the Hunter Biden laptop now is why exactly did Twitter ban coverage of the story? Who was in charge of that operation and what were their connections to Democrat operatives and the Biden campaign?

Any journalist wanna get on this or nah?

A few months from now, make sure to remember those who are being accused of “Russian disinformation” when it comes to Ukraine. pic.twitter.com/IgSrfyyNax

Hunter’s emails are real and America has a corrupt man sitting in the White House.

It was never about the truth.

It was always about beating Trump by any means necessary.

NYT confirms "10 percent for the big guy" emails are real. So when do the impeachment proceedings begin? #ImpeachBiden

Biden on his ‘Mental Focus’: ‘I No More Think of Myself as Being as Old as I am Then Fly’