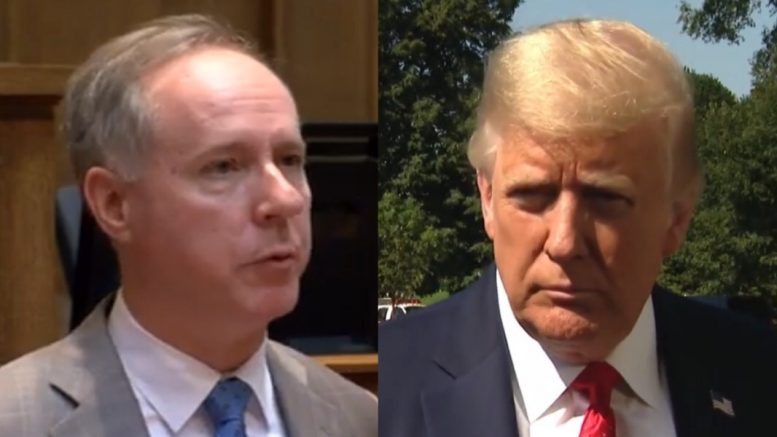 45th President Donald J. Trump issued an email statement on Thursday urging Wisconsin lawmakers to continue their pursuit of 2020 presidential election decertification, saying in part, “Speaker Vos should do the right thing and correct the Crime of the Century—immediately!”

Wisconsin GOP Assembly Speaker Robin Vos on Wednesday admitted there was widespread fraud in the 2020 election, however, he does not believe there is a constitutional avenue to decertify Wisconsin’s election results.

“Speaker Robin Vos, of the Great State of Wisconsin, just said there was ‘widespread fraud’ in the 2020 Presidential Election, but that the State Legislature cannot do anything about it. Wrong! If you rob the diamonds from a jewelry store, if you get caught, you have to give the diamonds back, votes should be no different, the 45th President said in a statement from his Save America PAC.

“There is already a very powerful resolution in the Wisconsin State Assembly that calls for the decertification of the 2020 Election and reclaiming of Wisconsin’s 10 electoral votes. There is so much fraud, as Vos knows, that this should be done quickly and easily,” Trump explained.

Representative Timothy Ramthun introduced a resolution to decertify the results of Wisconsin’s 2020 presidential election in November 2021, noting that the legislature has the plenary right to reclaim Wisconsin’s 10 electors.

“The highly respected Special Counsel, Michael Gableman, has exposed so much already, including election bribery with Mark Zuckerberg’s $8.8 million, horrific fraud stealing votes from the elderly in nursing homes, and rampant ballot harvesting and phantom votes. Far more votes than is needed for the Republican candidate, me, to win,” Trump further said in statement following Gableman’s report, which was released on March 1. Continued Below

Vos signed a new contract last week with Michael Gableman, the former state Supreme Court justice he hired to investigate the 2020 election, extending his review through the end of April. The extension came after the original contract expired Dec. 31 and a week after Gableman delivered a report that called for the Wisconsin Legislature to take a serious look at decertifying President Joe Biden’s victory in the swing state, Newsmax reported.

The 45th President reminded us, via his Thursday statement, that the country, and perhaps the world, would be in a different place under his leadership.

“Our Country would not be in the mess it’s in if Republicans had the courage to act. We would be energy independent, no inflation, the Ukraine desecration would not be happening, our economy would be strong, there would have been no surrender in Afghanistan, and so much else,” he said. Continued Below

“Speaker Vos should do the right thing and correct the Crime of the Century—immediately! It is my opinion that other states will be doing this, Wisconsin should lead the way!” Trump urged.

“Speaker Robin Vos, of the Great State of Wisconsin, just said there was “widespread fraud” in the 2020 Presidential Election, but that the State Legislature cannot do anything about it. Wrong! If you rob the diamonds from a jewelry store,… pic.twitter.com/3iU3mgGLwd

Related: Trump: ‘Based on the Gableman Report, I Would Imagine That There can Only be a Decertification of Electors’