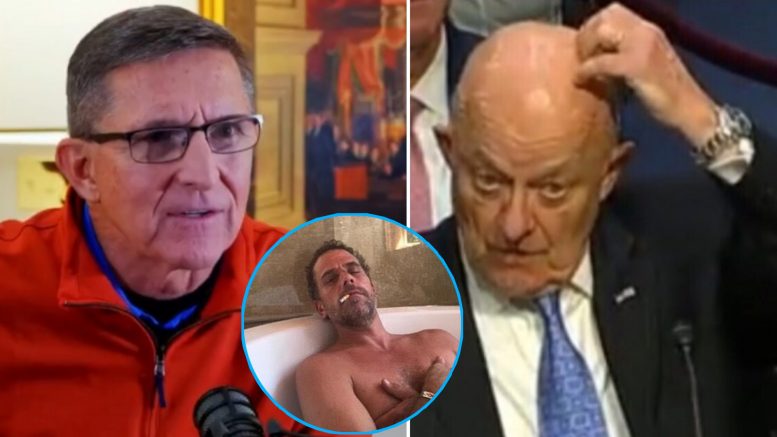 Retired Army Lieutenant General Michael Flynn called out the names of over 50 former “intelligence” officials who he claims “colluded to interfere” in the 2020 election by discrediting the Hunter Biden laptop story first reported by the New York Post.

The New York Times recently admitted that damning emails and files exposed from Hunter’s laptop were, in fact, authentic, as was The Post’s report on how they obtained it.

[The] 51 former “intelligence” officials who cast doubt on The Post’s Hunter Biden laptop stories in a public letter really were just desperate to get Joe Biden elected president. And more than a year later, even after their Deep State sabotage has been shown again and again to be a lie, they refuse to own up to how they undermined an election.

The officials, including CNN pundit and professional fabricator James Clapper — a man who was nearly charged for perjury for lying to Congress — signed a letter saying that the laptop “has the classic earmarks of a Russian information operation.”

In response, General Flynn released the following statement on Telegram:

“Remember their names: These are the 50+ former ‘intelligence’ officials who colluded to interfere in the 2020 election by signing a letter saying that Hunter’s laptop was a Russian plot:

“Nine further ‘intelligence’ officials colluded with those listed above but decided to remain anonymous…makes these latter nine even bigger snakes.

“Our system is rotted from the inside.”

Flynn followed up with a picture of New York Post’s Saturday front page headline drawing attention to the latest develepments.

Schweizer on Why NYT Is Reporting on Hunter’s Laptop: They’re ‘Extremely Concerned’ He Will Be ‘Indicted’