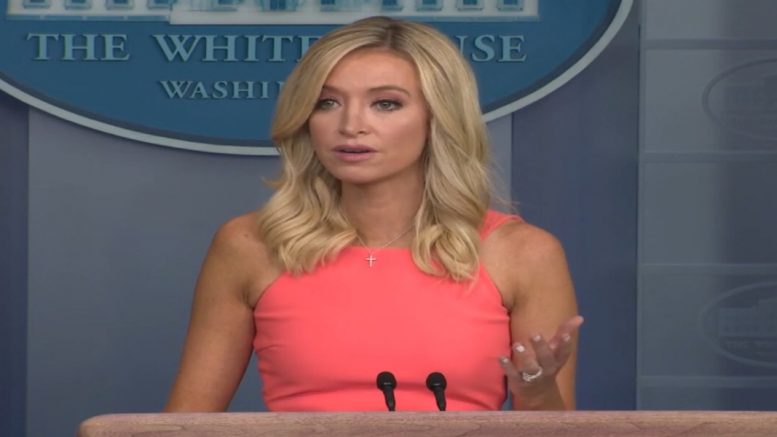 This comes after the paper most recently alleged over the weekend that the Commander in Chief had been briefed on reported Russian bounties placed on U.S. troops in Afghanistan and called for paper to identify its “anonymous source”.

The NYT claimed: “The intelligence finding was briefed to President Trump, and the White House’s National Security Council discussed the problem at an interagency meeting in late March, the officials said.”

Asked during Monday’s briefing, how does President Trump “know if he hasn’t been briefed, how is he certain that Russia didn’t put out these bounties?”

Kayleigh McEnany responded: “The president is briefed on verified intelligence and again, I would just point you back to the absolutely irresponsible decision of the The New York Times to falsely report that he was briefed on something that he in fact, was not briefed on.”

“Everybody is denying it & there have not been many attacks on us Nobody’s been tougher on Russia than the Trump Administration. With Corrupt Joe Biden & Obama, Russia had a field day, taking over important parts of Ukraine – Where’s Hunter? Probably just another phony Times hit job, just like their failed Russia Hoax. Who is their ‘source’?” the president asked.

McEnany told reporters Monday: “I really think that it’s time for The New York Times to step back and ask themselves ‘Why they’ve been so wrong, so wrong, so often?'”

The White House press secretary proceeded to list off a series of stories that the paper got wrong during Trump’s presidency.

“The New York Times falsely claimed Paul Manafort asked for polling data to be passed along to Oleg Deripaska before having to issue a correction,” McEnany said.

The Times said in its correction that Manafort wanted the data sent to two Ukrainian oligarchs, Serhiy Lyovochkin and Rinat Akhmetov, not to Mr. Deripaska, who is close to the Kremlin.

“In June of 2017, The New York Times falsely wrote all 17 intel agencies had agreed on Russian interference, before having to issue a correction that it was only four agencies.,” McEnany told reporters.

The Times said in their correction that Mr. Trump was also correct about inaccurate news reports. Some, including an article in The New York Times, incorrectly reported that all 17 American intelligence agencies had endorsed the assessment. Video Below

McEnany named another column from the Times in March 2019, by a “former Times executive editor that asserted the Trump campaign and Russia had an overarching deal that the ‘the quid of help in the campaign against Hillary [Clinton] for the quo of a new pro-Russian foreign policy'”

“That’s what we call the Russian hoax. It was investigated for three years with tax payer dollars before ultimately getting exoneration in the Mueller report. It is inexcusable– the failed Russia reporting of The New York Times,” she said.

“I think it’s time the New York Times and the Washington Post hand back their Pulitzers,” McEnany added.

Ben Carson Reacts To Accusations That Trump Is Racist: ‘I’ve Never Seen Any Of That, Whatsoever’