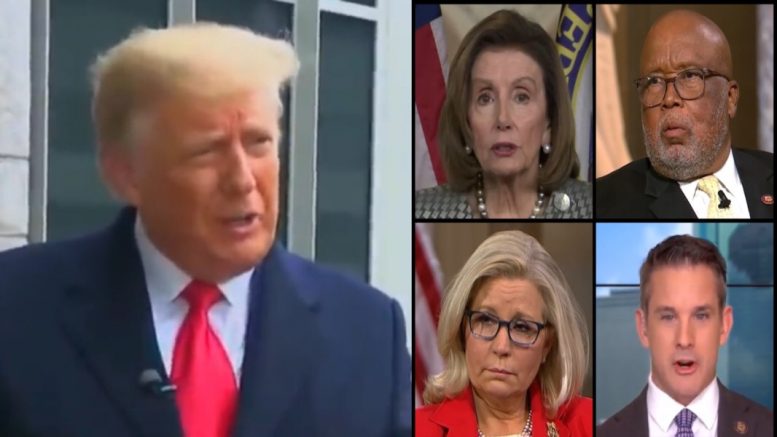 45th President Donald J. Trump fired back a lengthy email statement on Thursday appearing to respond to the January 6 Committee’s latest claim, in that Trump and his associates engaged in a “criminal conspiracy” to prevent Congress from certifying — Democrat career politician –Joe Biden’s alleged victory in the Electoral College. Trump said in part, “their lies and Marxist tactics against political opponents will not stop the truth”.

The committee made the claims in response to a lawsuit by Trump adviser John Eastman, a lawyer and law professor who was consulting with Trump. The 221-page filing by the committee is an effort to link the 45th President to a federal crime. Lawmakers do not have the power to bring criminal charges on their own and they can only make a referral to the Justice Department.

“The actual conspiracy to defraud the United States was the Democrats rigging the Election, and the Fake News Media and the Unselect Committee covering it up. Few things could be more fraudulent, or met with more irregularities, than the Presidential Election of 2020,” 45th President Donald Trump said from his “Save America” PAC.

“They refuse to cover the facts, such as just this week the special counsel in Wisconsin called for the decertification of the 2020 Election because of massive illegality, including election bribery, and the preying on the elderly for votes, which resulted in fraud of ’95-100 percent turnout,’ an impossibility, in at least 91 nursing homes,” Trump said, referring to Michael Gableman, who provided a second interim report to the state legislative body on March 1.

“This is true with many other states, especially swing states. In Arizona, 204,430 mail-in ballots had mismatched signatures that were never sent to review, and 740,000 mail-in ballots had broken chain of custody, all far more necessary than the votes needed, 10,457, for ‘President Trump to win'”, he noted, referencing the findings from the Arizona Senate forensic audit.

“In Georgia, over 240 ballot harvesters have been identified in an illegal operation spanning multiple swing states, all caught on video,” Trump said, calling attention to filmmaker and political commentator Dinesh D’Souza and Catherine Engelbrecht of True the Vote, who made a documentary called “2,000 Mules” — using video that was obtained through open-records requests, which purportedly shows “mules” stuffing ballot boxes.

“The evidence is monumental but the Unselect Committee of politically partisan hacks, and someone who had a steaming hot affair with a Chinese spy, hides the facts,” Trump said of Rep. Eric Swalwell (D-CA), who had a relationship with a Chinese spy named Christine Fang or Fang Fang.

“Judges and even justices of the United States Supreme Court, are afraid to even look, as was the Attorney General of the United States, who was so petrified of being held in contempt or being impeached by the Democrats, which they were constantly threatening him with, that he was virtually a broken man who allowed for the systemic violation of election laws and other things to take place,” he said, referring to former Attorney General William Barr.

Barr, in Sept. 2020, had described the risks of the widespread mail-in-voting during an interview with anchor Wolf Blitzer on CNN. “People trying to change the rules to this methodology, which as a matter of logic is very open to fraud and coercion, is reckless and dangerous, and people are playing with fire,” Barr had said before the President Election took place, then ultimately he alleged fraud did not occur in the 2020 election, without providing any evidence to back up his claim.

Trump continued: “The reason for January 6th was that millions of people in our Country know the Election was Rigged and Stolen, and Nancy Pelosi refused to put the requested 10,000+ troops in the Capitol three days earlier, as strongly recommended by me. She didn’t like ‘the look'”.

“The Unselect Committee’s sole goal is to try to prevent President Trump, who is leading by large margins in every poll, from running again for president, if I so choose. By so doing they are destroying democracy as we know it,” he suspects. “Their lies and Marxist tactics against political opponents will not stop the truth, or the biggest political movement, Make America Great Again/America First, in the history of our Country.

“And now we have a war waging in Ukraine that would have never happened, record-setting inflation, an embarrassingly poorly executed withdrawal from Afghanistan, and an economy that is teetering, at best. All because of a corrupt Election result,” the 45th President added.

“The actual conspiracy to defraud the United States was the Democrats rigging the Election, and the Fake News Media and the Unselect Committee covering it up. Few things could be more fraudulent, or met with more irregularities, than the… pic.twitter.com/BrEsaIXGg0

Related: Trump: “If I Run & If I Win, We Will Treat Those People From Jan. 6th Fairly. If It Requires Pardons, We Will Give Them Pardons”