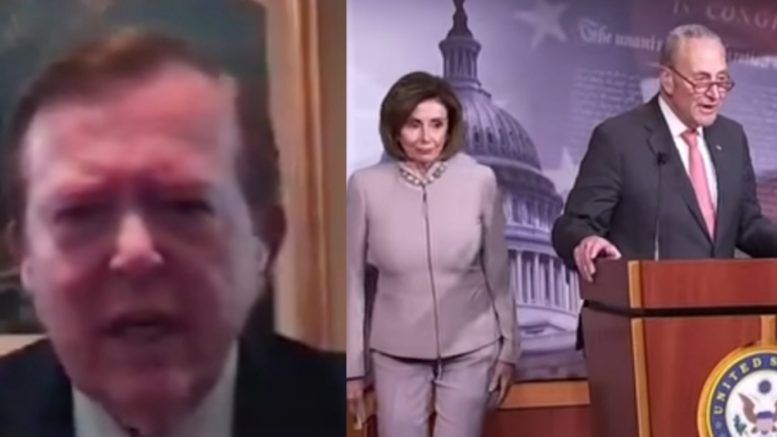 Dobbs, who has been under self-quarantine since one of his staffers tested positive for COVID-19, is livid by Pelosi’s decision to create and present her own version of a coronavirus bill as Senate Democrats at the lead of Schumer have continually blocked the stimulus package that is being negotiated in the Senate.

Related Article: James Woods: “Pelosi/Schumer Have Been Holding America Hostage Since The Moment Trump Put His Hand On The Bible On Inauguration Day”

“Nancy Pelosi is acting so bizarrely,” Dobbs said. “She and Schumer have suddenly taken on a manifesto, not a bill.”

He continued, “When you go through all that is suggesting, that so-called bill, it’s insane to think in the midst of the worst pandemic in… just over a hundred years in this country, we are listening to the tripe that these two, Schumer and Pelosi are spewing.”

“And worse, the national left wing media is, in most cases, doing so without comment, let alone criticism for crying out loud. So, I think we should be very worried,” he proclaimed. Video Below

Dobbs then declared that if any Republican member of Congress gives in to “any element of Pelosi’s manifesto”, he doesn’t think they should be re-elected.

“This is an outrage on affront of the Constitution and the American people and it should not be tolerated,” Dobbs said.

“It is so abhorrent and disgusting what they’re doing to working men and women and their families and to think that the national left-wing media daily attacks this President who is working tirelessly, and I mean tirelessly day after day, week after week, while these fools are playing pure politics,” he concluded. “What we need is help for the American people.” Video Below