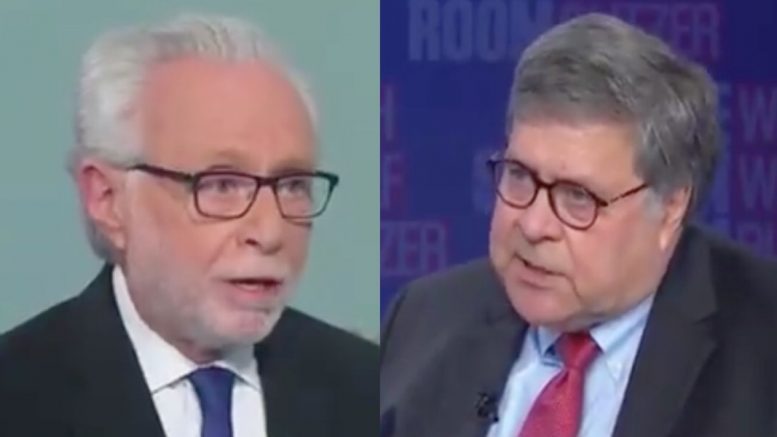 Attorney General William Barr on Wednesday described the risks of the widespread mail-in-voting in the upcoming election and spared with anchor Wolf Blitzer, during an interview on CNN.

The attorney general cited a 2005 study from a bipartisan commission led by former President Carter and former Secretary of State James Baker who had warned that mail ballots were at risk of fraud and coercion.

“[Carter and Baker] said back in 2009, that mail-in-voting is fraud with the risk of fraud and coercion,” Attorney General Barr said before being interrupted by Wolf Blitzer.

The interview grew tense as Blitzer tried to interject, which prompted Barr to fire back at the anchor, declaring, “Let me talk!”

The attorney general argued that the narrative around the safety of mail-in voting has shifted during the Trump administration but that the risks remain. “Since that time, there have been in the newspapers, in networks, academic studies saying, ‘It is open to fraud and coercion’. The only time the narrative changed is after this administration came in, but elections that have been held with mail have found substantial fraud and coercion,” Barr explained.

“For example, we indicted someone in Texas– 1700 ballots collected from people who could vote. He made them all out and voted for the person he wanted to. That kind of thing happens with mail-in-ballots, and everyone knows that”, Barr said. Continued Below

Blitzer claimed “as far as widespread fraud, we haven’t seen that”, prompting the attorney general to say: “We haven’t had the kind of widespread use of mail-in-ballots as being proposed”.

“We’ve had absentee ballots from people who request them from a specific address,” he informed Blitzer. “Now what we’re talking about is mailing them to everyone on the voter list, when everyone knows those voter lists are inaccurate. People who should get them don’t them, which has been one of the major complaints in states that tried this in municipal elections. And people who get them are not the right people. They’re people who have replaced the previous occupant and they can make them out.”

“Sometimes multiple ballots come to the same address with several generations of occupants. You think that’s a way to run a vote?” Barr asked. Video Below

Blitzer argued again that “we haven’t seen fraud”, which Barr responded, “So far we haven’t tried it.”

“This is playing with fire,” Barr told Blitzer. “We’re a very closely divided country here, and people have to have confidence in the results and the legitimacy of the government.”

“And people trying to change the rules to this methodology, which as a matter of logic is very open to fraud and coercion, is reckless and dangerous, and people are playing with fire,” the attorney general reiterated.

(Related: Ronna McDaniel Rejects Pelosi’s Push For Mail-In Voting: “They Want To Take Away The Safeguards That Ensure The Integrity Of The Election”)