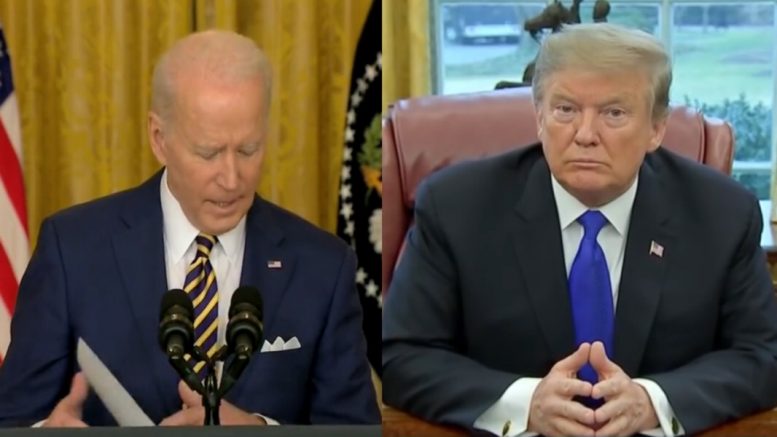 45th President Donald J. Trump issued an email statement on Wednesday, wondering why 79-year-old Joe Biden “picks a reporter off a list” and then “reads the answer?”

“How come Biden picks a reporter off a list, in all cases softball questions, and then reads the answer?” 45th President Donald Trump asked in his statement from his “Save America” PAC.

“I would never have been allowed to get away with that, nor would I have to!” he added.

Former press secretary for the 45th President, also slammed the quality of the press conference. “Where are the follow-ups from reporters?” she tweeted. “Why was there no pushback to Biden saying ‘it’s one thing if it’s a minor incursion’ re Russia going into Ukraine? Where is the pushback on Biden claiming he ‘outperformed’ expectations? The list goes on All pleasantries, no pushback!” Video Below

Here are a few clips of Joe Biden calling on reporters from his list:

Biden struggles to call on reporters from his list pic.twitter.com/mvMV2dB8mv

Joe Biden is once again using a #CheatSheet as he calls on reporters in today's press conference.
After he finishes his first answer, Joe looks at his cheat sheet and reads her name off his list without even glancing at her. pic.twitter.com/2bJ0VQMWeb

On his next list of reporters to call on, Biden blames the supply chain for inflation. pic.twitter.com/RobexNwnyI

"How come Biden picks a reporter off a list, in all cases softball questions, and then reads the answer? I would never have been allowed to get away with that, nor would I have to!" pic.twitter.com/SNikclCHyK