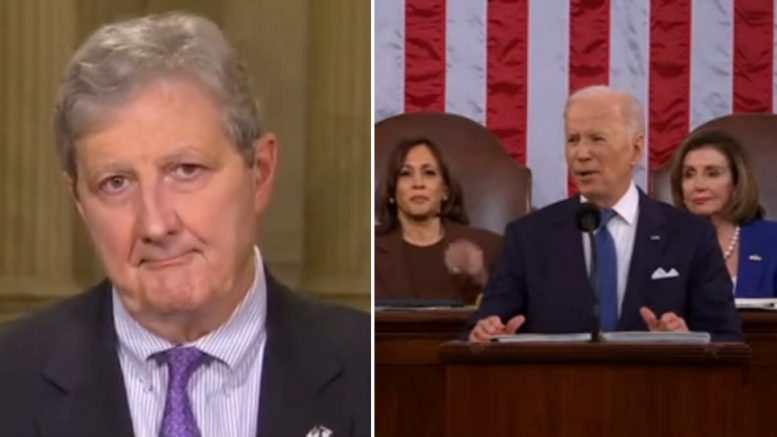 In wake of the Ukraine invasion, the White House signaled no plans to attempt being energy independent as “harsh U.S. sanctions against Russia do not target its energy sector, despite bipartisan calls to ban Russian oil imports, at least temporarily,” AP News reported. “Banning Russian imports could restrict global oil supplies and ‘raise prices at the gas pump for Americans,’ White House spokeswoman Karine Jean-Pierre said Wednesday. ‘That’s something that we’re very aware of.'”

After explaining the America has worked years trying to be energy independent, Sen. Kennedy declared, “Now President Biden wants to change all of that. He wants us to stop producing oil and gas, give up our energy independence, and his new policy is that we should buy oil and gas from foreign countries that hate us, like Russia, so those foreign countries will have more money to buy weapons to try to kill us, and that’s his new policy.”

“Unless you identify as an idiot, you can see the national security implications of this,” he continued. “So why, you ask, is the president doing this? Because he wants to make happy the woke neo-socialist cupcakes that have taken over the Democratic party. And in doing so, he’s putting the country at risk.”

.@SenJohnKennedy tells @JesseBWatters unless you identify as an idiot you can see the national security implications of buying energy from Russia. You ask why is the president doing this? Because he wants to keep the cupcakes in his party happy. pic.twitter.com/gHMvaTsCba