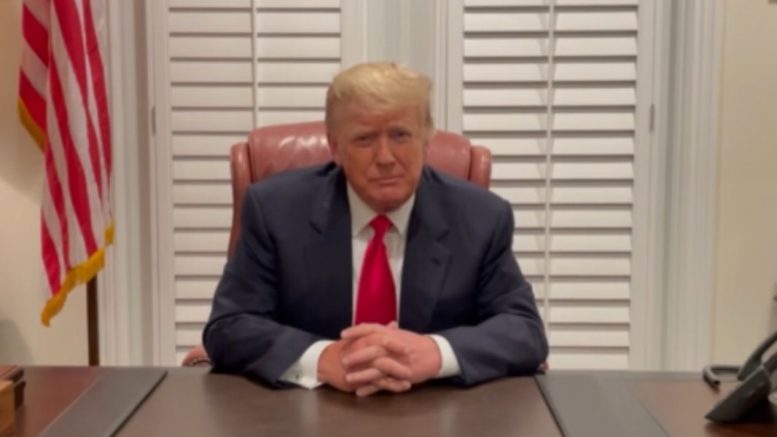 45th President Donald J. Trump issued a pair of email statements Monday morning highlighting that he was the one who “got delinquent NATO members to start paying their dues” and also noted that he sent Javelins to Ukraine versus “blankets”.

He also suggested if “the Election wasn’t Rigged” and he were still in the White House, America would remain “energy independent” …  “continue to have record-low gas prices”, and would be “supplying the world with oil and gas”.

“I hope everyone is able to remember that it was me, as President of the United States, that got delinquent NATO members to start paying their dues, which amounted to hundreds of billions of dollars. There would be no NATO if I didn’t act strongly and swiftly,” the 45th President said from his “Save America” PAC.

On Saturday, Germany announced it would finally contribute at least 2 percent of its GDP to defense spending. “From now on, more than 2 per cent of our GDP will be invested in our defence,” Chancellor Olaf Scholz said about the additional 100 billion euros that would be added to the German defense budget.

In 2018, Trump criticized Germany for for their lack of defense spending while supporting a Baltic Sea gas pipeline deal with Russia. “I think it’s very sad when Germany makes a massive oil and gas deal with Russia, where you’re supposed to be guarding against Russia, and Germany goes out and pays billions and billions a year to Russia,” Trump told NATO Secretary-General Jens Stoltenberg.

Trump further said in his Monday statement, “Also, it was me that got Ukraine the very effective anti-tank busters (Javelins) when the previous Administration was sending blankets. Let History so note!”

According to ABC News, the Trump administration first approved the sale of Javelins to Ukraine in December 2017 — a step that former President Barack Hussein Obama never took and that Trump allies have pointed to as a sign of Trump’s toughness on Russia.

That first sale, which was completed in March 2018, included 210 Javelin missiles and 37 launch units and was intended to “help Ukraine build its long-term defense capacity to defend its sovereignty and territorial integrity in order to meet its national defense requirements,” according to the Defense Security Cooperation Agency. Continued Below

In a second email statement on Monday, Trump said, “If my energy policy had remained in place, where we were energy independent, and would have soon been bigger in production than Saudi Arabia and Russia combined, the world would have had no problems whatsoever. This war should never have started in the first place.”

“If the Election wasn’t Rigged, America would right now continue to have record-low gas prices, as it was under my Administration, and we would be supplying the world with oil and gas. Also, Russia would not have attacked Ukraine. Instead, we have a horribly tragic and unnecessary war, record-high energy prices, Inflation, no Border, crime, and chaos,” he noted. “Make America STRONG Again!”

Meanwhile, White House press secretary Jen Psaki on Sunday told host George Stephanopoulos on ABC’s ‘This Week’, “I would also note that on oil leases, what this actually justifies in President Biden’s view, is the fact that we need to reduce our dependence on foreign oil, on oil in general, and we need to look at other ways of having energy in our country and others.”

White House @PressSec Jen Psaki tells @GStephanopoulos that Sen. Tom Cotton's proposal to reopen the Keystone Pipeline in an attempt to impact Russia's energy sector "does not solve any problems."

strongly and swiftly. Also, it was me that got Ukraine the very effective anti-tank busters (Javelins) when the previous Administration was sending blankets. Let History so note!”

“If my energy policy had remained in place, where we were energy independent, and would have soon been bigger in production than Saudi Arabia and Russia combined, the world would have had no problems whatsoever. This war should never have… pic.twitter.com/t7pD4NIUSF

(Related: ‘A Must Watch’: Ric Grenell Implores; Shares Video of When Trump was Stern With NATO Sec. Over Germany’s gas Pipeline Deal)