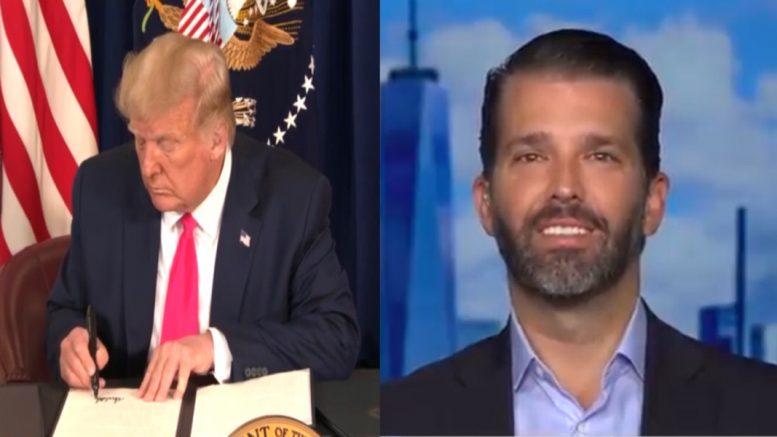 The president announced a $400-per-week supplemental unemployment payment to out-of-work Americans. He unveiled an extension of student loan relief and protections from evictions for renters and homeowners. He also also signed a payroll tax holiday through the end of the year for Americans earning less than $100,000, while promising more relief if he wins a second term, per Fox News.

The president signed the executive actions from his Trump National Golf Club in Bedminster, N.J., as club members cheered him on. He blamed Democrats for the coronavirus stalemate in Congress and said he’d take matters into his own hands, reported Fox News.

“Democrats are obstructing all of it,” the Commander in Chief said. “Therefore, I’m taking executive action … and we’re going to save American jobs and provide relief to the American workers.”

“They want to steal the election,” President Trump said of Democrats. He also suggested that Democrats will “sue”, but he isn’t worried about the legality because “everything gets sued.” Continued Below

Donald Trump Jr. responded Saturday on Twitter after his father signed the executive orders, revealing how Democrats just got Trumped.

“While Democrats obstruct & tear sh*t down, @realDonaldTrump acts and never lets YOU down!” Trump Jr. expressed.

$400/week in unemployment benefits. Now Chuck & Nancy might sue to stop you from getting relief? Have at it, losers!” he declared. Video Below

While Democrats obstruct & tear shit down, @realDonaldTrump acts and never lets YOU down!

Now Chuck & Nancy might sue to stop you from getting relief? Have at it, losers!

Like he did with the wall, smart move by President @realDonaldTrump to bypass duplicitous and destructive Democrats in Congress and protect the American people. That’s real leadership.

At this point, it’s clear Democrats want to play politics with American jobs.

To workers all over the country: D.C. Democrats may not have your back, but President Trump does.

Since Democrats won’t step up and do their job, @realdonaldtrump will do it for them.

Struggling Americans need action now. I am glad that President Trump is proving that while Democrats use laid-off workers as political pawns, Republicans will actually look out for them. My full statement: https://t.co/5uEu6PSUGH

Pelosi & Schumer held up relief for the American people because they wanted a liberal wishlist that talks more about "cannabis" than a “job.”

Today President Trump took action to make up for Democrats’ failures. He stepped up to deliver targeted relief to the American people.

The President is absolutely correct that the Dems’ inappropriately named “Heroes Act” includes:

-voter ID ban throughout the US

…and some other terrible ideas that must be rejected!

For weeks, Democrats let the American people suffer as they worked to further their liberal agenda. Today @realDonaldTrump put an end to their partisan games.

Every American should be proud to have a President who will always put the American people over politics!