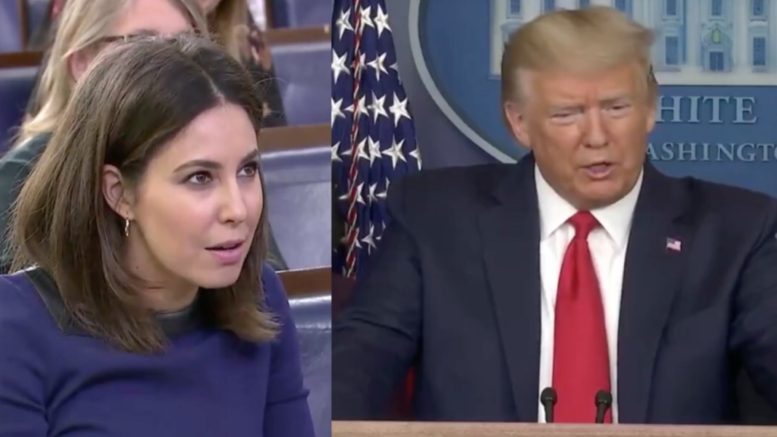 Members of the coronavirus task force held a press briefing Wednesday to give an update on the COVID-19 pandemic.

During the briefing, President Donald Trump took questions from reporters and was asked again why he uses the phrase “Chinese Virus” to describe the virus that was first detected in China.

According to the Centers for Control and Disease Prevention (CDC), COVID-19 is a respiratory disease caused by a novel (new) coronavirus that was first detected in China, and which has now been detected in more than 150 locations internationally, including in the United States. The virus has been named “SARS-CoV-2” and the disease it causes has been named “coronavirus disease 2019” (abbreviated “COVID-19”).

ABC’s Cecilia Vega asked President Trump: “Why do you keep calling this the Chinese Virus? There are reports of dozens of incidents of bias against Chinese Americans in this country. Your own aid, Secretary Azar said he ‘does not use this term’. He says ‘ethnicity does not cause the virus’. Why do you keep using this? A lot of people say it’s racist.”

“I have great love for all of the people from our country. But as you know, China tried to say at one point, maybe they stopped now, that it was caused by American soldiers. That can’t happen. It’s not gonna happen as long as I’m president. It comes from China,” the Commander in Chief informed ABC’s Cecilia Vega. (Continued Below)

Related: Trump Responds To Criticism Of Using The Phrase ‘Chinese Virus’: “Saying That Our Military Gave It To Them Creates A Stigma”

Last week, a Chinese official promoted a conspiracy theory claiming that the United States military may have brought the coronavirus to China and that it did not originate in the city of Wuhan.

“CDC was caught on the spot. When did patient zero begin in US? How many people are infected? What are the names of the hospitals? It might be US army who brought the epidemic to Wuhan. Be transparent! Make public your data! US owe us an explanation!” Foreign Ministry spokesman Zhao Lijian tweeted. (Video Below)

Over the weekend, U.S. Surgeon General VADM Jerome M. Adams directly told the press: “no more finger-pointing or criticism” and called for “less stories looking at what happened in the past.”

“No more bickering, no more partisanship, no more criticism, or finger-pointing,” he suggested to the reporters. “There will be plenty of time for that, but we all need to hit the reset button and lean into moving forward.”

Before the media’s fake outrage, even CNN called it “Chinese Coronavirus.”

Those trying to divide us must stop rooting for America to fail and give Americans real info they need to get through the crisis.

Here are some examples of the media using the term “Chinese virus”:

Liberal media pundits want you to think referring to the coronavirus as the "Wuhan" or "Chinese" virus is racist.

Here's just a few of the times the liberal media did just that. pic.twitter.com/ss3kV5smSP