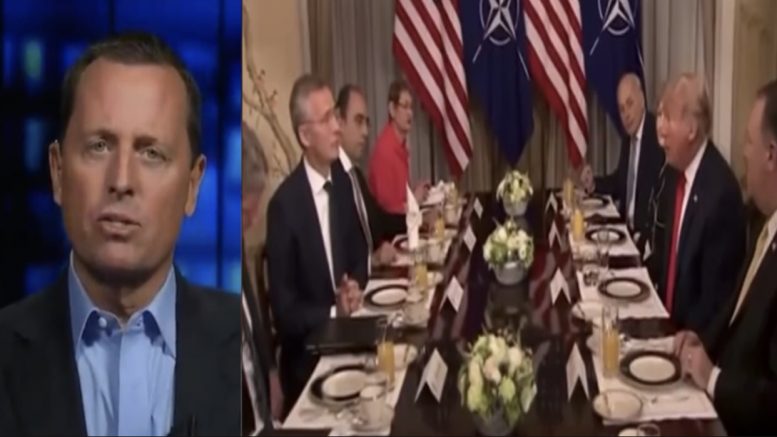 “I think it’s very sad when Germany makes a massive oil and gas deal with Russia, where you’re supposed to be guarding against Russia, and Germany goes out and pays billions and billions a year to Russia,” Trump told NATO Secretary-General Jens Stoltenberg.

“So we’re supposed to protect you against Russia and you pay billions of dollars to Russia and I think that’s very inappropriate,” Trump expressed at the residence of the U.S. ambassador in Brussels. “And the former chancellor of Germany is the head of the pipeline company that’s supplying the gas. Ultimately, Germany will have almost 70 percent of their country controlled by Russia with natural gas.”

“So, you tell me, is that appropriate?” he asked, while Stoltenberg listened. “… It should have never been allowed to have happened. But Germany is totally controlled by Russia. You tell me if that’s appropriate, because I think it’s not, and I think it’s a very bad thing for NATO. And I don’t think it should have happened, and I think we have to talk to Germany about it.” Continued Below

“On top of that, Germany is paying just over 1%, whereas the United States, in actual numbers, is paying 4.2% of a much larger GDP. So, I think that’s inappropriate also. You know, we’re protecting Germany, we’re protecting France, we’re protecting everybody and yet, we’re paying a lot of money to protect them. This has been going on for decades,” Trump detailed.

The 45th President ultimately got European countries starting to pay their fair share for NATO. Video Below

The video shared by Ric Grenell comes after Russia launched an attack on Ukraine Wednesday night, including Kyiv, that Russia called a “special military operation”. Russian President Vladimir Putin threatened “consequences you have never seen” to any country that interferes in Ukraine.

I know CNN & MSNBC never aired this, so I figured I would. Spot on, don't you think? pic.twitter.com/6V1vRKxP8p