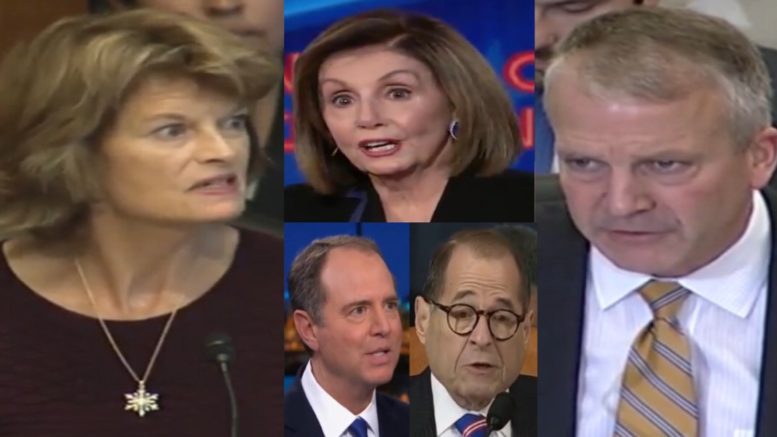 On Thursday, House Speaker Nancy Pelosi (D-CA) called for Congress to move forward with impeachment against President Donald Trump. “The facts are uncontested. The president abused his power,” Pelosi claimed during a press conference. “Our president leaves us no choice but to act. Sadly, but with confidence and humility, today, I am asking our chairman to proceed with articles of impeachment.”

According to Anchorage Daily News, Alaska’s Republican U.S. senators on Friday denounced the impeachment process that has unfolded in the House of Representatives and that may soon reach the Senate if the House brings formal impeachment charges against President Donald Trump.

Sen. Lisa Murkowski said she has not been impressed with the Democratic-led process in the House.

“There has been little to no, I think, efforts to try to work with either the Republican House members on the committees or to kind of come to some terms of rules of engagement,” she said in a telephone interview. “And so it has made this appear even more partisan than perhaps it might have otherwise.”

Sen. Dan Sullivan, meeting with Anchorage Daily News reporters on Friday, said the process in the House has been unfair and “sorely lacking” in due process protections for the president. The initial hearings occurred in secret, closed hearings, with the Democratic majority selectively leaking information to national media outlets, he said. (Continued Below)

Sullivan said Trump has cited legitimate reasons for delaying the military aid, including concerns about corruption in Ukraine. There was uncertainty over whether Zelensky, elected in April, would also be corrupt, Sullivan said.

“And under federal law, we have to actually look at that before we send military aid,” Sullivan said.

Sullivan said he might have handled the phone call differently than the president did. “Would I have tied that directly to Joe Biden? Maybe not,” Sullivan said. “But is that an impeachable offense? That’s the real question, and I think that’s a pretty high bar. (Continued Below)

Sullivan also said that a vote on impeachment charges in the House could see bipartisan opposition, with only partisan support from Democrats. “That would also be a first in U.S. history, and even the speaker has said previously that if you’re going to do something as dramatic as impeachment, you better be bringing out a strong bipartisan group of House members to do it,” he said.

In an interview with The Washington Post on March 11, 2019, Speaker Pelosi said: “Impeachment is so divisive to the country that unless there’s something so compelling and overwhelming and bipartisan, I do not think we should go down the path because it divides the country.”

During a CNN town hall Thursday, Pelosi was pressed by Jake Tapper on why she’s still pursuing impeachment without bipartisan support. “I’m saying the ‘Republicans have failed’ to meet the standard of honoring their oath of office to protect and defend the Constitution of the United States,” Pelosi told Tapper, placing the blame on the GOP.

President Trump tweeted on Saturday, “Read the Transcripts! Also, see where I say “us” (our Country) as opposed to “me” (meaning me) and where I then say that the Attorney General (of the United States) will call you. People still remember Schiff’s made up and fraudulent version of my conversation. Witch Hunt!” (Continued Below)

Meanwhile, Democrats on the House Judiciary Committee on Saturday released a report outlining the constitutional grounds for impeachment.

President Trump on Thursday urged Democrats in the House to impeach him “fast, so we can have a fair trial in the Senate and so that our country can get back to business.”

He indicated that Republicans would seek testimony from top Democrats including House Intelligence Committee Chairman Adam Schiff, former Biden and his son Hunter, as well as Speaker Pelosi.

Read the Transcripts! Also, see where I say “us” (our Country) as opposed to “me” (meaning me) and where I then say that the Attorney General (of the United States) will call you. People still remember Schiff’s made up and fraudulent version of my conversation. Witch Hunt!

…..trial in the Senate, and so that our Country can get back to business. We will have Schiff, the Bidens, Pelosi and many more testify, and will reveal, for the first time, how corrupt our system really is. I was elected to “Clean the Swamp,” and that’s what I am doing!