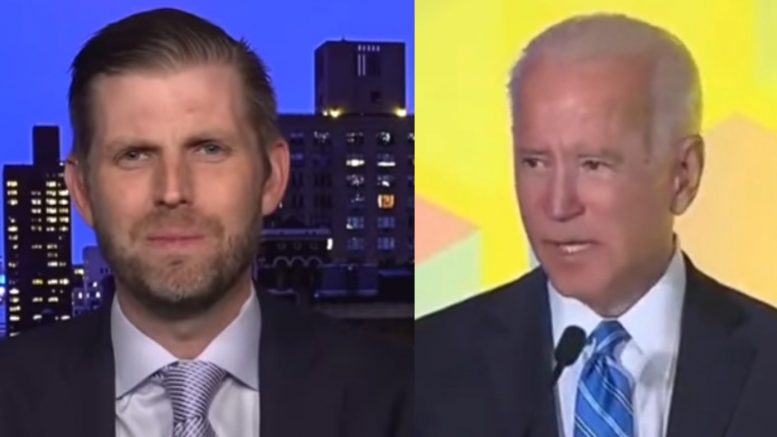 Eric Trump, second son of  45th President Donald Trump, shared a video on Saturday of Joe Biden speaking in 2019 at the DNC Women’s Leadership Forum Conference, warning the audience against voting to re-elect Trump by suggesting a hypothetical fall of Ukraine.

“This didn’t age well,” Eric Trump declared and attached the clip of Biden’s previous comments on what could “happen in Ukraine” under President Trump amid the current ongoing Russian invasion of Ukraine.

“It’s going to take a hell of a lot of work to make up for all the damage he’s done internationally and nationally,” Biden claimed. “His network of thugs and co-conspirators are going to continue to try to undermine our democracy in the meantime.”

“Imagine what he can do in another year,” the career Democrat politician said. “Imagine what can happen in Ukraine.”

Meanwhile, Russia launched an attack on Ukraine Wednesday night, including Kyiv, that Russia called a “special military operation”. Russian President Vladimir Putin threatened “consequences you have never seen” to any country that interferes in Ukraine.

President of Ukraine Volodymyr Zelensky vowed to defend Ukraine’s independence and has turned down an offer from the United States to evacuate from the capital city Kyiv. “The fight is here; I need ammunition, not a ride,” Zelensky told the US, according to the embassy in Britain.

Biden, 2019: "Imagine what can happen in Ukraine" if Trump is reelected.

Eric Trump also shared another video on Friday, saying, “It was all so avoidable… Trump was right again.”

It was all so avoidable… Trump was right again.
pic.twitter.com/tAcIGmCMvj