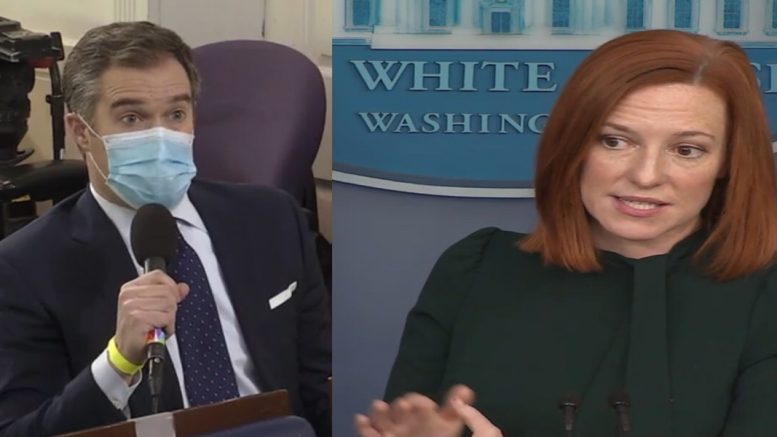 During a White House press briefing on Thursday, NBC News White House correspondent Peter Alexander asked a question over the subject of mask-wearing. He posed his question by referencing a video which is circulating on Twitter.

The video Alexander cited, shows some residents in a Naples, Florida grocery store not wearing masks. The person recording the video appears to be snitching on the employees and customers.

A correspondent for NBC News based in Miami, Sam Brock, posted the video on Twitter Wednesday:

Alexander told White House press secretary Jen Psaki, “There’s an NBC News video that went viral in a grocery store in Naples, Florida. You may or may not have seen this. If you haven’t, I’ll describe it to you. When you pan the grocery store, you see that almost everybody in there is not wearing a mask, even though it’s in a county where I believe masks are mandated.”

“The question is: Beyond urging American’s to wear masks, what specifically is this White House doing to combat this resistance, especially giving the concerns about the coronavirus mutation and others right now,” the NBC News White House correspondent wondered.

Psaki replied, “Well one, we are trying to communicate about it as frequently as possible. Obviously, you see I wear a mask out here. I take it off when I come to the podium based on the recommendations of our health and medical experts. You all are wearing masks right now. And the president has taken steps that are possible through his federal authorities, including mandating them on public lands, on airplanes.” Video Below

“But also, what we are trying to do is make our health and medical experts available to ensure people understand, and I’ll reiterate it here today. It’s not just a vaccine, as obviously, it’s an incredible medical breakthrough. And we want every American to have one,” Psaki said.

“But even after you’re vaccinated, social distancing, wearing masks are gonna be essential,” she claimed, without offering scientific data or a study. “And we need to continue communicating that through health and medical experts.”

Alexander followed up, asking, “What do you say to those folks in this video, I believe, who owns or runs that store who said, ‘He doesn’t believe that 450K Americans have died from coronavirus’. At the end of the day, we need everybody on board to beat this virus. What do you tell them?”

“We try to fight the misinformation with facts, Peter. And fight it with health and medical experts, including at a national level, local level to convey to people that wearing a mask is something that not only can save the lives of their neighbors but of their family members. It’s steps their taking to protect themselves. I mean, we know statistically, or from our health experts I should say, that if Americans wore masks for 100 days, 50K lives would be saved. We know it’s not gonna be overnight, but we can communicate about it in a non-political way and factual way so that Americans can take steps to save themselves,” Psaki said.

The NBC News correspondent also wondered how much it would cost to send a mask to every American, to which Psaki said, “There are a range of options on the table to help protect more Americans from the coronavirus. And I encourage people to mask up. As I said, that’s vital to us, because it’s not just about the vaccine. It’s also about social distancing, ventilation, and certainly, wearing masks. But no decision has been made to do that, so I don’t have a cost assessment. Obviously, it would depend on how many people would be sent a mask.”

The full exchange between NBC News White House correspondent Peter Alexander and White House press secretary Jen Psaki can be viewed at the 44:35 mark in the video below.