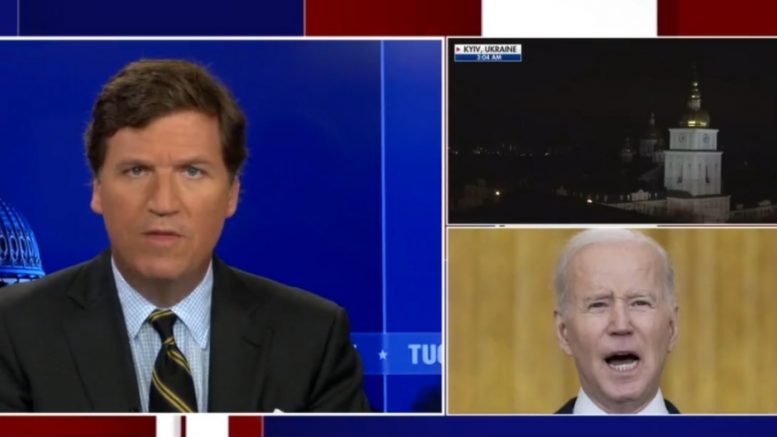 “The invasion of Ukraine is a humiliating defeat for Joe Biden,” declared Tucker Carlson on his Friday night program.

“He’s our leader He staked this country’s reputation, billions of dollars and the full force of the U.S. government on preventing Vladimir Putin from invading Ukraine. Vladimir Putin anyway, and America is diminished by that,” Tucker proclaimed.

Related Article: Auschwitz Memorial Releases a Statement As Russia Attacks Ukraine: ‘This Act of Barbarity Will Be Judged by History’

The Fox News host went on to assert that “this isn’t the first time” Joe Biden has diminished America’s reputation since taking office as he pointed out the “indescribably chaotic withdrawal from Afghanistan,” which resulted in American citizens being left behind and arming the Taliban with billions of dollars of advanced U.S. military equipment that was abandoned.

“So here you have two historic foreign policy debacles in under a year. Is there a precendent for that? What’s the message of it? What weakness” Tucker continued. “Joe Biden is quickly draining the reservoir of America’s credibility and power it has accumulated over centuries of wise decision making.”

The invasion of Ukraine is a humiliating defeat for Joe Biden. He is quickly draining the reservoir of American credibility and power that has accumulated over centuries of wise decision making. pic.twitter.com/xEW0LENXJL