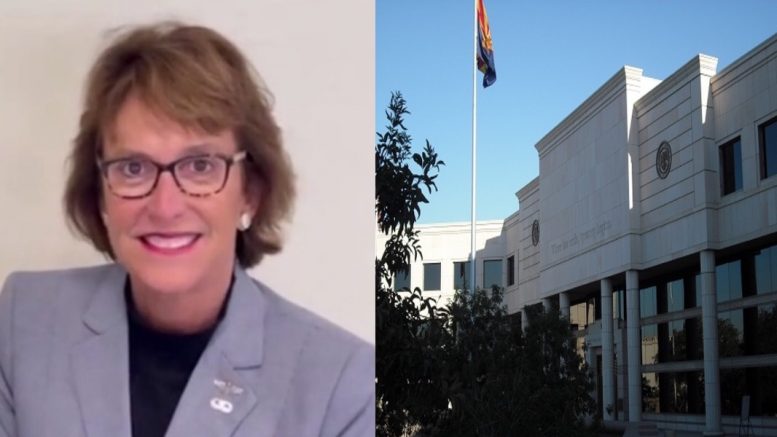 Election integrity champion Arizona State Senator Wendy Rogers (R) released a statement on Tuesday following an opinion from the Arizona Supreme Court, who ruled in favor of Rogers in a defamation case originating from her 2018 attack ads against then-State Senator Steve Smith.

Rogers attacked her opponent — former state Sen. Steve Smith — in multiple advertisements, including a radio commercial that called him a “slimy character whose modeling agency specializes in underage girls and advertises on websites linked to sex trafficking,” the Arizona Capitol Times reported last May.

Justice Clint Bolick wrote the opinion for the majority. “We decide today that the First Amendment precludes a defamation action based on a political advertisement directed at an opposing candidate, in which the third-party plaintiff is unnamed, the alleged defamation is not expressed but only implied, and the asserted implication is not one that would likely be drawn by a reasonable listener,” he said.

Smith worked with the Young Agency, and Pamela Young brought the defamation action after the 2018 election (which Rogers lost). The trial court had refused to grant summary judgment for Rogers, finding that a jury should decide whether defamation had occurred. The Court of Appeals disagreed and ruled in Rogers’ favor. Today’s opinion agrees with that decision, but vacates the Court of Appeals’ reasoning, Arizona’s Law reported.

“The Arizona Supreme Court upheld the First Amendment of the United States today and further upheld political speech at a time when Big Tech is censoring truth at an increased rate,” Senator Rogers said in a statement.

“I am grateful to the justices on the Court and for my attorneys Dominic Draye, Jeff Walsh, and the entire team at Greenberg Traurig for their astute legal prowess, intellect, enduring faith, and perseverance,” she added.

The ruling from the Arizona Supreme Court can be read HERE.

and the entire team at Greenberg Traurig for their astute legal prowess, intellect, enduring faith, and perseverance. @AzCourts @GT_Law #FreeSpeech (2/2)

Sen. @WendyRogersAZ has beaten back a defamation lawsuit arising from the 2018 election in a 4-3 opinion by the state Supreme Court. The case will be remanded back to trial court for summary judgment in favor of Rogers.