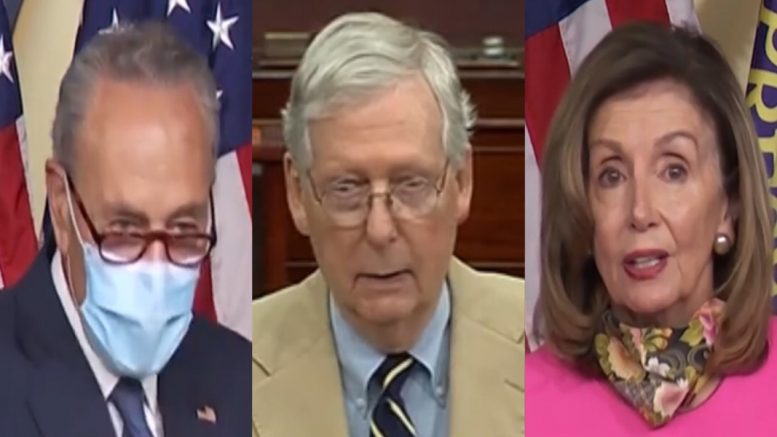 “Speaker Pelosi herself put it this way: ‘This is an opportunity. Every crisis is'”, Senator McConnell noted of Democrats’ seizing on the moment to restructure– to fit their vision.

“I had hoped that this week, the Senate would be busy providing more coronavirus aid. Chairmen and ranking members would be working overtime, across the aisle, to finalize another major pandemic relief package for the American people. After all, there are so many important ways in which American families need help, and which Democrats say they see as big priorities, just like Republicans do,” Senator McConnell said.

“Priorities like continuing a federal add-on to unemployment insurance. More tools for schools to safely re-open. More access to testing and diagnostics. More resources to develop vaccines and treatments. A new round of checks to put cash in families’ hands ASAP. Another round of the hugely successful Paycheck Protection Program that small businesses have relied on, which was left out of the Democrats’ proposal,” he continued.

“But sadly for the country, sadly for struggling Americans, the Speaker of the House of Representatives and the Senate Democratic Leader decided we would not deliver any of that,” the Kentucky Senator said.

“For weeks, Speaker Pelosi and the Democratic Leader stalled and stalled in backroom negotiations with the Administration’s team. For weeks, they held up important aid over non-COVID-related demands. They stayed true to their comments from very early on in this pandemic. They saw this pandemic as, quote, ‘a tremendous opportunity to restructure things to fit our vision.’ That was the House Democratic Whip. Speaker Pelosi herself put it this way: ‘This is an opportunity. Every crisis is'”, Senator McConnell noted. Continued Below

“Just listen to some of their demands. These are the Democrat demands that stood between all this help and the Americans who need it. Here’s one: Democrats say nobody gets another dime of relief unless state and local governments get about a trillion dollars in extra money,” Sen. McConnell stated.

“Let’s put a few facts on the table. Number one: State and local governments have only spent about one fourth of the huge sums we sent them back in the springtime. Number two: The economists who have calculated the likely COVID-related shortfalls for state and local governments have mostly produced estimates that are entire multiples less than what Democrats are demanding. Number three: In our HEALS Act, Republicans tried to give states and localities extra flexibility around the unspent funds they already have,” he continued.

“But forget all that– Democrats are demanding that we send state and local governments a colossal amount of money, with no relationship to actual need, while they’ve only spent a quarter of the money they’ve already gotten. Clearly this isn’t really about COVID at all. Democrats think they smell an opening they have wanted for years– to make Uncle Sam bail out decades of mismanagement and broken policies in places like New York, New Jersey, and California,” he pointed out. Video Below

I hoped this week we’d be finalizing major legislation. After all, American families are struggling and need help. But Speaker Pelosi and Leader Schumer decided not to deliver. I am glad the president stepped in to soften the blow of their hostage tactics.

“And so they’ve decided that no working family anywhere in America can get another cent unless they get to create a trillion-dollar slush fund for mismanaged states, completely out of proportion to pandemic needs,” the Senate Majority Leader said.

“Plenty of Democrats said they saw the point and were happy to negotiate on this. … But the Speaker and the Democratic Leader overruled them. No deal unless we pay people more to stay home. It’s not about COVID. It’s not about a real re-opening. It’s about far-left ideology. They preferred for the jobless benefits to go down to zero unless they could pay people more to stay home,” McConnell pointed out.

“Does anyone in this country really believe that relief for Americans should be totally contingent on bailing out states for mismanagement that predated this pandemic by decades? Does anyone really think that it was better for jobless benefits to completely expire unless we pay people more not to work? … They think they have political leverage over the President of the United States, and so they’re willing to personally increase the pain for vulnerable families unless they get their way on matters not related to COVID-19,” he said.

“So this is where we are. The previous UI benefits expired. The PPP closed its doors. Over the weekend, President Trump took steps to soften the blow of the Democrats’ hostage tactics on American families who need help most. His decisions will help spare some Americans some of the pain from the Democrats’ hostage-taking,” Senator McConnell said.

“From the beginning, our side has tried everything possible to find common ground and deliver more help. But Democrats said no. At least the American people know the score,” he added.

(Related: “Have At It, Losers!”: Don Jr. Reveals How Dems Just Got Trumped By The President’s Executive Orders)