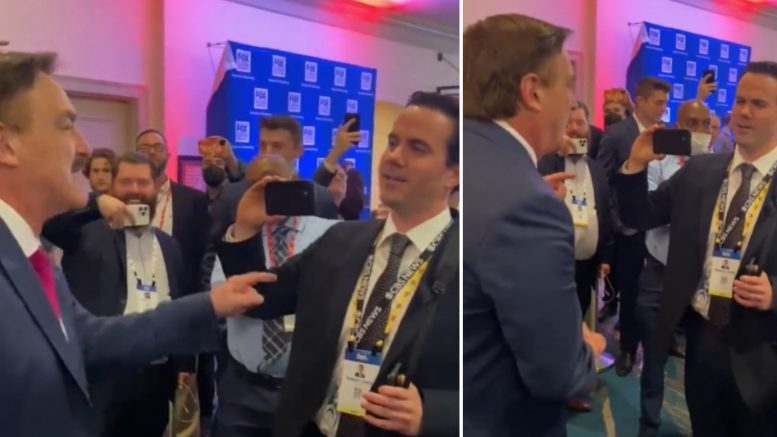 Chief election and campaign correspondent for CBS News, Robert Costa, confronted Mike Lindell at CPAC on Saturday over notes the MyPillow CEO was seen holding in hand on January 15, 2021 at the White House after a meeting with 45th President Donald Trump.

In response, Lindell fired back at Costa calling him a “traitor” to his face and saying the event from the White House is “old news”.

“That picture will go down in history of helping save this country,” Mr. Lindell told CBS’ Costa at CPAC on Saturday, referring to when he had visited the White House in January 2021 and Washington Post photographer Jabin Botsford had captured a glimpse of his notes he was holding.

@MyPillowUSA CEO Michael Lindell shows off his notes before going into the West Wing at the White House on Friday, Jan 15, 2021 in Washington, DC. pic.twitter.com/AY6AyJNSyE

Lindell had told both the New York Times and the Washington Examiner, after the Jan. 2021 meeting with Trump, that the photographed notes were not, in fact, his, and that he was delivering a message given to him by an attorney, whom Lindell did not identify by name.

Zoomed-in shots of the photographs showed the partially visible notes appearing to mention “martial law if necessary” and the “Insurrection Act,” an 1806 law that allows the president to mobilize the military and National Guard troops.

Another line in the photographed notes suggested moving former Department of Defense chief of staff Kash Patel to “CIA Acting,” implying a proposal to move Patel to head the intelligence agency days before Democrat career politician Joe Biden swore into office on Jan. 20, 2021. Continued Below

“Who gave you those papers?” Robert Costa asked Lindell at CPAC.

“Who gave me those papers? It’s none of your business. A bunch of lawyers did. I’ve never read them. I went in there with evidence on January 15th. You guys are all news. You regurgitate — you all do it,” Lindell said.

“… I went in there with four papers to show Dominion and the election crime of the machines and China attacking our country — cyber attack, all 50 states, over 12 million votes that Donald Trump won by 82 million to 68 million was the real count,” he explained.

Pressed again over who gave Lindell the papers, the MyPillow CEO told Costa that he just told him, and said, “Why don’t you go back and watch your own rotten news. You guys are the worst journalists. You journalists are traitors. Traitor! Traitor! Traitor! CBS Robert Costa is a traitor to the United States of America.”

This is how my exchange today with Lindell ended. Calmly asked him to provide names of lawyers, the lawyers who he says provided him with papers that included the mention of “martial law.” Papers he carried into a meeting with Trump. pic.twitter.com/GHQVTyNgWW

Here is another angle of the confrontation when it unfolded:

Mike Lindell was just confronted by CBS News’ Robert Costa at #CPAC. He called him a “traitor to America“ and got everyone to chant “traitor! traitor! traitor!“ pic.twitter.com/S62W17Je3U

“Who let Communist CBS into CPAC to ambush patriots?” she asked.

Lindell has so far refused to give an answer about who told him to bring those papers and ideas to Trump, or who else was involved in related discussions during Trump’s final days.