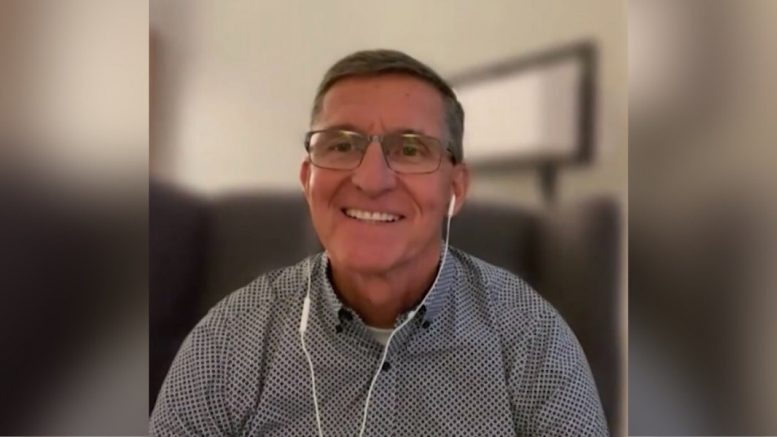 Retired United States Army Lieutenant General Michael Flynn and former National Security Advisor to 45th President Donald Trump, believes Special Counsel John Durham has “key people that are cooperating with him” in his investigation “because they know they got caught dead to rights”.

General Flynn’s speculation stems after Durham filed the government’s motion to inquire into potential conflicts of interest in the Michael Sussmann case last week— alleging that lawyers from Hillary Clinton’s presidential campaign in 2016 had paid to “infiltrate” servers belonging to Trump Tower and later the White House, in order to establish an “inference” and “narrative” to bring to federal government agencies linking Donald Trump to Russia.

“Where I think this is going, is I think Durham — he has a grand jury. He is definitely putting people in front of that grand jury,” General Flynn said on OAN’s “Tipping Point” this week.

“And I think the lack of a lot of these big mouths that we saw out of the Department of Justice and FBI and the intelligence community that were all over the media in 2017, 2018, 2019, beating on Donald Trump, beating on me, I think what you’re going to start to see … even more of them exposed and potentially — some of the more senior people up the ladder are gonna be receiving indictments,” Mr. Flynn surmised.

“I believe that Durham does have key people that are cooperating with him now, because they know they got caught dead to rights,” he told host Kara McKinney.

“Those key people, and I could probably surmise a couple of them, because I do believe they probably thought that they were doing the right thing and then, when they realized it was the wrong thing, they probably have said, ‘Look, I’ll cooperate. I don’t want to get caught up in this. I gave my judgement to president or the vice president or to the director of the FBI or to the director of the CIA’. That’s what I believe right now,” General Flynn added. Video Below

Michael Flynn:“I believe that Durham does have key people that are cooperating with him now because they know they got caught dead to rights.” @Nefertari_25 @TippingPointOAN https://t.co/QLOKxms0Fe pic.twitter.com/Gz2ULsotsz

Trump Responds As Murkowski Says She Is ‘Still Weighing Whether To Run Again’: “Great News For The Republican Party!”

Brennan Touts His Criticism Against Trump’s Administration Over The Past 4 Years, Bongino Fires Back