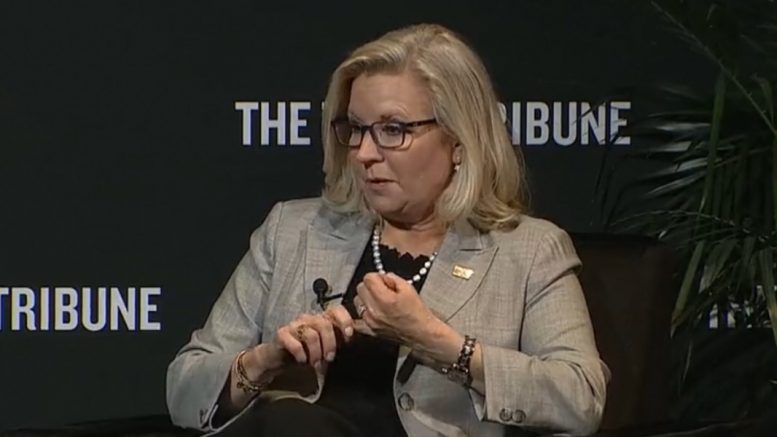 Rep. Liz Cheney (R-WY) said that she will do “whatever it takes” to make sure 45th President Donald Trump is not the GOP presidential nominee during for the 2024 elections, along with claiming she will no longer remain a Republican if Trump succeeds.

“I’m going to make sure Donald Trump, make sure he’s not the nominee,” Cheney told Texas Tribune CEO Evan Smith. “And if he is the nominee, I won’t be a Republican.”

.@Liz_Cheney says if Donald Trump is the Republican nominee in 2024, she will not be a Republican. #TribFest22 pic.twitter.com/3PXuOTBTDy

Cheney suffered a precipitous loss in the Republican primary for her Wyoming seat for her role on the committee, and she said Saturday that she would not vote for the Republican nominee for her seat, Harriet Hageman, in the general election, Texas Tribune reported.

Cheney, the daughter of former Vice President Dick Cheney, lost by 37 points. In her concession speech, the Wyoming congresswoman appeared to compare herself to President Abraham Lincoln.

“The great and original champion of our Party, Abraham Lincoln, was defeated in the elections for the senate and the House before he won the most important election of all. Lincoln ultimately prevailed, he saved our Union, and he defined our obligation as Americans for all of history,” she had said in part.

Trump commented on Truth Social last month to hail the “very decisive WIN” by the challenger he had endorsed, Harriet Hageman, saying the “very big Liz Cheney loss” was “far bigger than had ever been anticipated.” 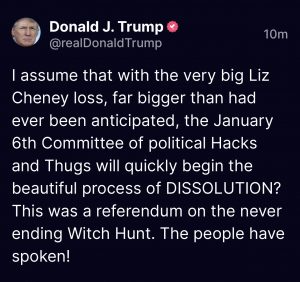 Related: Liz Cheney Appears to Hint at Presidential Run, Trump Reacts: ‘She’s too Angry & Sick to Succeed in the Future, but who Knows!’