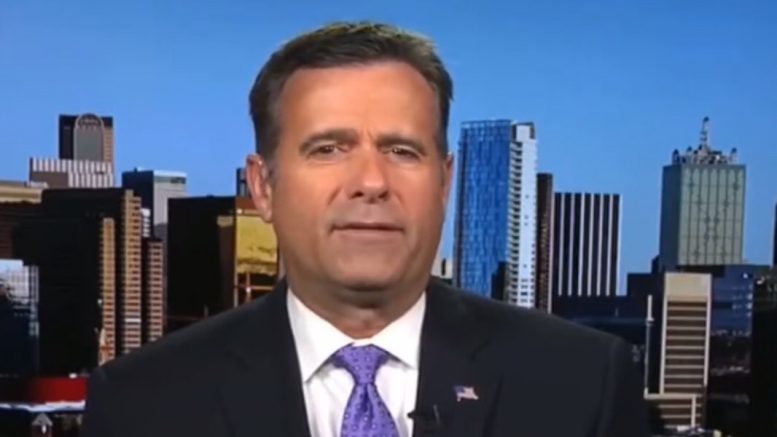 “I think this pleading alleges or alludes to a conspiracy, meaning two or more people in furtherance of a crime and anyone that was aware that this campaign plan was going to be falsely pitched to the FBI or the CIA or law enforcement or intelligence authorities would be subject to criminal prosecution for any number of criminal crimes,” John Ratcliffe said.

He clarified: “Mail fraud, wire fraud lying under oath, congressional testimony, false testimony to prosecutors. All of those things, so it could go broadly and deeply. I think it does, based on intelligence that I have seen and that I discussed with John Durham”.

“I think this conspiracy, and I do think there was a criminal conspiracy, is broad and deep. And I hope that, obviously John Durham is moving carefully. But I would expect and anticipate, based on the intelligence that I’ve seen, that there would be quite a few more indictments relating to this,” he added. Video Below

John Ratcliffe declassified two heavily redacted Russia-related documents in October 2020 when he was the former director of national intelligence, including handwritten notes from former CIA Director John Brennan, which revealed he briefed then-President Barack Hussein Obama in 2016 on an unverified Russian intelligence report.

According to the declassified notes, Brennan and the U.S. intelligence community knew months prior to the 2016 election that the collusion smear was the result of a campaign operation hatched by the campaign of Democratic presidential candidate Hillary Clinton, as reported by The Federalist.

(Related: Grenell: ‘There Is No Possible Way That You Can Be Spying & Monitoring Computers At The White House, Unless You Have The Help Of The U.S. Government’)

Joy Behar Questions ‘Why Does Trump Need All Those Doctors?’, Instantly Gets Blasted