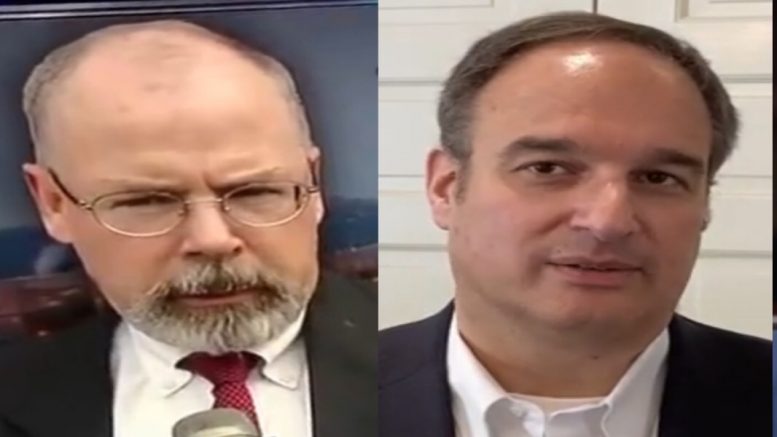 Sussmann claims in the motion to dismiss that the Durham indictment “fail[s] to state an offense”, however, Sussman has been charged with making a false statement to a federal agent, and has sussman pleaded not guilty.

Durham’s indictment alleges that Sussmann told then-FBI General Counsel James Baker in September 2016, less than two months before the 2016 presidential election, that he was not doing work “for any client” when he requested and held a meeting in which he presented “purported data and ‘white papers’ that allegedly demonstrated a covert communications channel” between the Trump Organization and Alfa Bank, which has ties to the Kremlin.

Sussmann’s legal team insisted that he “did not make any false statement to the FBI.” The attorney added that the false statement alleged in the indictment is “about an entirely ancillary matter,” and “immaterial as a matter of law.”

His lawyers also demanded that the court “strike” six paragraphs of Durham’s February 11 filing, including the section titled “Factual Background,” claiming the sections would “taint” the jury pool.

Special Counsel John Durham on Thursday responded to Sussman’s claims, saying that there is “no basis” to “strike” any part of his recent filing. Continued Below

Durham pushed back the against the assertion that his office “intentionally sought to politicize” the case, and instead, defended the “additional factual detail” he included, which he argued is “central to proving” Sussmann’s “alleged criminal conduct.”

The special counsel, in a new filing Thursday night, urged the court to “deny the defendant’s motion.”

“As an initial matter, defense counsel has presumed the Government’s bad faith and asserts the Special Counsel’s Office intentionally sought to politicize this case, inflame media coverage, and taint the jury pool. That is simply not true,” Durham’s filing states, noting that his February 11 filing “included two paragraphs of limited additional factual detail in its Motion for valid and straightforward reasons.” Continued Below

“First, those paragraphs reflect conduct that is intertwined with, and part of, events that are central to proving the defendant’s alleged criminal conduct,” Durham wrote.

“Second, the Government included these paragraphs to apprise the Court of the factual basis for one of the potential conflicts described in the Government’s Motion, namely, that a member of the defense team was working for the Executive Office of the President of the United States (“EOP”) during relevant events that involved the EOP,” Durham wrote.

“If third parties or members of the media have overstated, understated, or otherwise misinterpreted facts contained in the Government’s Motion, that does not in any way undermine the valid reasons for the Government’s inclusion of this information,” Durham added.

“In light of the above, there is no basis to strike any portion of the Government’s Motion,” the special counsel wrote, adding that the government intends to file motions in which it will “further discuss these and other pertinent facts to explain why they constitute relevant and admissible evidence at trial.” Continued Below

Jeff Carlson and Hans Mahncke of The Epoch Times explain the filing in a detailed video HERE. Continued Below

#Durham NEW 29 page Sussmann filing accuses Durham of “extraordinary prosecutorial overreach” + seeks dismissal false statement charges because issue is “entirely ancillary matter – about who his (Sussmann’s) client might have been when he met with FBI” https://t.co/u3vcJiHlBy pic.twitter.com/E3mYSBOgVY

detail in its Motion for valid and straightforward reasons” + “Government intends to file motions in limine in which it will further discuss these, other pertinent facts " + "filing of documents containing reference to such evidence on the public docket is appropriate + proper”