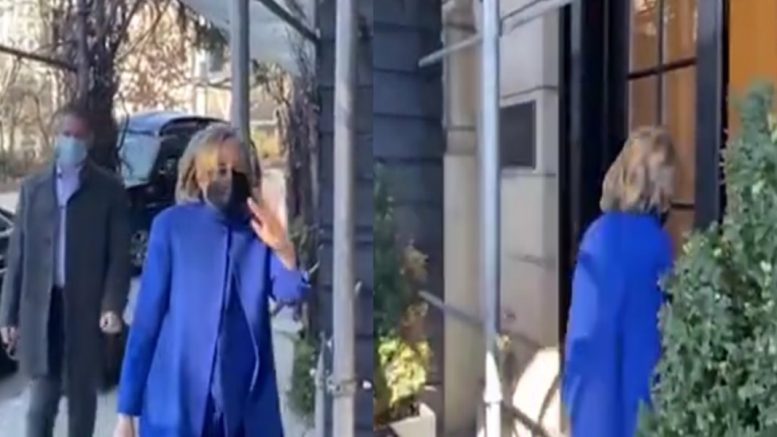 Hillary Clinton was seen wearing a blue coat, black pants, and an oversized black mask on her face, but refused to to answer questions over allegations related to the Durham investigation.

“Hillary, Laura Collins, Daily Mail. Did you pay to spy on the Trump campaign? When are you going to comment on the spying allegations, Hillary? Did you pay to have them spied on?”, the Daily Mail chief investigative reporter asked the former secretary of state.

Rodney Joffe (identified as Tech Executive-1 in the Michael Sussmann indictment and in the latest filing discussing the conflict) exploited proprietary – and perhaps classified – data provided by DARPA to further their own political attacks, and how that might result in charges. It was later confirmed that two former DARPA employees have given grand jury testimony, Swamp Drain reported.

According to Durham, Joffe and his associates exploited internet data from “the Executive Office of the President of the United States” to further their own political agenda. They had come to possess this data as part of a “sensitive arrangement” with the U.S. government. Video Below

Hillary Clinton tweeted what appears to be blatant misinformation on October 31, 2016, just days before the presidential election. She had shared a statement from Jake Sullivan, who was a top foreign policy adviser on her campaign. The tweet remains on Twitter.

“This could be the most direct link yet between Trump and Moscow,” Sullivan claimed. “Computer scientists have apparently uncovered a covert server linking the Trump Organization to a Russian-based bank. This secret hotline may be the key to unlocking the mystery of Trump’s ties to Russia.”

(Related: Grenell: ‘There Is No Possible Way That You Can Be Spying & Monitoring Computers At The White House, Unless You Have The Help Of The U.S. Government’)

‘2 Down, 8 To Go!’: Trump Takes Delight In GOP Rep. Kinzinger’s Announcement To Retire