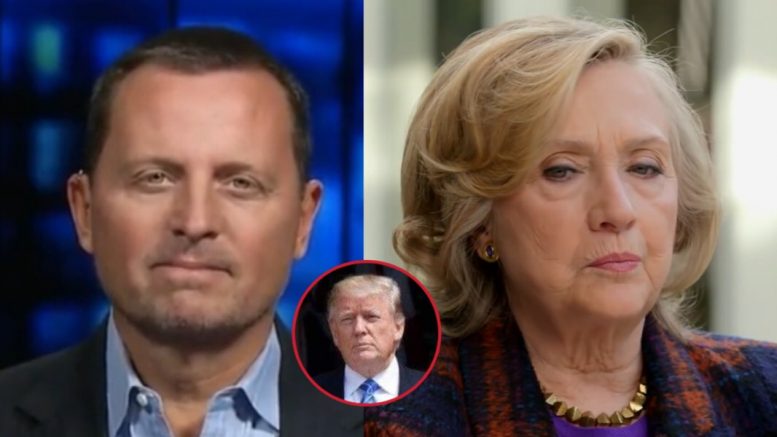 Richard Grenell, who served as acting director of the United States National Intelligence under President Donald Trump, believes the U.S. government may have assisted a tech company in infiltrating Trump Tower and White House servers.

Grenell’s speculation follows new allegations filed on February 11, 2022 by Special Counsel Durham. Mr. Durham filed the government’s motion to inquire into potential conflicts of interest in the Michael Sussmann case, which alleges Hillary Clinton’s 2016 campaign paid a tech company to “infiltrate” Trump Tower and White House servers in a bid to establish a link to Russia.

Durham’s filing revealed how Clinton’s election campaign paid money to a tech firm to “infiltrate” servers that were at Trump Tower, and later the White House. According to a filing from Special Counsel John Durham, the aim was to try and smear Trump by linking him to Russia, which had been accused of meddling in the 2016 U.S. Presidential Election.

Richard Grenell told Carl Higbie Saturday on Newsmax’s “The Count”: “Durham’s filing makes it clear that this internet company … continually paid by the Clinton Campaign, was infiltrating the White House, the Executive Office of the president. They were spying, not only on the campaign of Donald Trump, but Donald Trump as president”. Continued Below

“Now think about that. I believe that there is no possible way that you can be spying and monitoring computers at the White House, unless you have the help of the U.S. government,” Grenell speculated.

Higbie responded, “So, you’re telling me, you think somebody was inside the government, working and giving information to a private tech spy firm on a sitting president of the United States, based on political opposition?”

“No. It’s a little different than that, Carl, because Durham has filed in court. And in his filings, he makes it clear that this internet company was spying on Donald Trump as president. Now he makes that very clear. This internet company can’t break into the White House computers on their own. They had to have had help from inside the U.S. government. That is my point,” Grenell clarified. Continued Below

“Did anyone know about this particular company spying on the president of the United States, and did they help in any way? I want to know exactly who in the U.S. government knew this and why they didn’t speak out,” he added.

The report claimed former Secretary of State Hillary Clinton planned in July 2016 on tying then-candidate Donald Trump to Russia’s hack of the Democratic National Committee to distract from her improper use of a private email server.