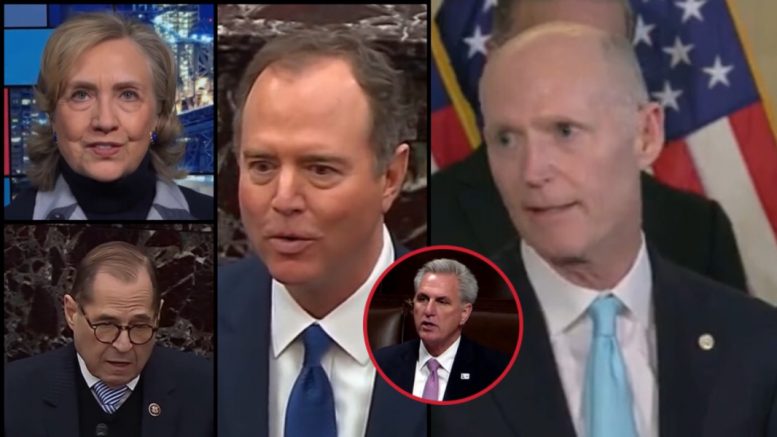 “For years, the media parroted the Democratic narrative about Russia collusion, and now as we’re learning week after week, that was a complete lie,” Senator Rick Scott told reporters in reference the latest filing from Special Counsel John Durham.

Sen. Scott was likely referring to Schiff’s ongoing claims there was Trump/Russia collusion “in plain sight”, and Nadler, who led continuous hearings, alleging Trump “violated the law six ways from Sunday” before Robert Mueller had testified over his 448-page report, which ultimately found: [T]he investigation did not establish that members of the Trump Campaign conspired or coordinated with the Russian government in its election interference activities.”

“The media needs to start doing their job, talk about exactly what’s coming out, and hold these people accountable. On top of that, Attorney General [Merrick] Garland, he needs to be out there making sure Durham has all resources he has. He needs to do a thorough investigation,” he also recommended. Continued Below

“Special Counsel John Durham’s continued investigation into the Russia hoax is essential to getting to the truth and protecting our democracy,” McCarthy said.

“Democrats and legacy media may want to sweep this alarming report under the rug, but if House Republicans earn the majority, we will use our oversight tools to determine whether federal funds were used, whether federal office-holders abused their power, and investigate other disturbing elements of this spying scheme to ensure nothing like it ever happens again,” he added. Continued Below

Sen. Rick Scott: "The latest with the Durham report is that the Clinton campaign, the same group that fearmongered this Russian collusion, actually spied on the President of the United States. They spied and they lied. We need accountability." https://t.co/rAd1Z6pqcM pic.twitter.com/uLrO6nWKYO

(Related: Daily Mail Reporter Grills Hillary Amid Durham Probe: ‘Did You Pay To Spy On The Trump Campaign?’)