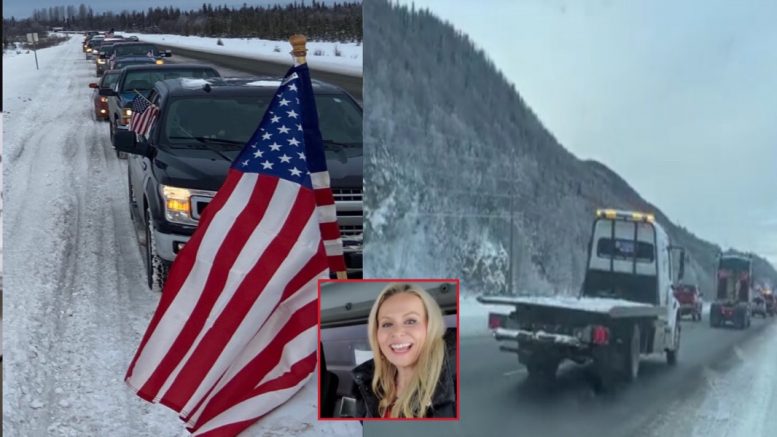 On Sunday, the “Alaska Freedom Convoy” traveled in the Last Frontier to show their support and solidarity with communities around the world that are standing up for freedom, protesting tyrannical mandates.

A second convoy drove to Eagle River from Mat-Su. Similar events were organized in the Kenai Peninsula and Fairbanks on Sunday. A rally happened in Juneau on Jan. 29.

Kelly Tshibaka, who is running for U.S. Senate to unseat Republican Senator Lisa Murkowski in the November midterms, posted a video on Twitter Sunday, showing her support for the truckers.

“We are taking part in the Freedom Convoy standing in solidarity with truckers in Canada and really across North America. We stand for their freedom to choose,” Kelly Tshibaka said from the cab of a truck. “We also stand with them as they fight for their jobs, their families, and their ability to take care of their communities.” Continued Below

“This is really about freedom — freedom from people who want to be tyrants and dictate what we put into our bodies. We are against mandates from our political leaders. Political leaders shouldn’t push their way into the patient-provider relationship,” Tshibaka said.

Trump has vowed to campaign in Alaska against Murkowski to help Tshibaka. Video Below

Had a great time at the Freedom Convoy today as we stand in solidarity with the truckers of Canada and all of North America as they fight for their jobs, families, and communities. pic.twitter.com/P2Z8VeouoF

Senator Dan Sullivan (R-AK) also spoke on Sunday in support of the truckers:

We leave you with a few videos from Sunday’s Alaska Freedom Convoy:

Breaking: Truckers for Freedom Alaska version today! Twitter blocked the video of the convoy but it is on our telegram page: https://t.co/wvwKDbZDVS
see it and follow our chanell. pic.twitter.com/Pe3106MEon